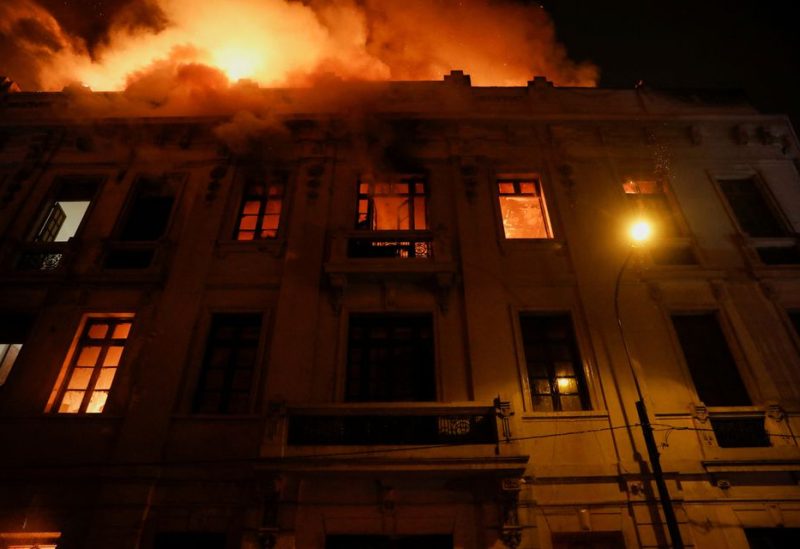 Smoke and flames rise from a building during the 'Take over Lima' march to demonstrate against Peru's President Dina Boluarte, following the ousting and arrest of former President Pedro Castillo, in Lima, Peru January 19, 2023 - REUTERS

On Thursday, thousands of Peruvian demonstrators, many of them were from the country’s south, which is mainly indigenous, poured into Lima, the capital, angry at the rising death toll since unrest began last month and demanding radical change.

Others believe the march attracted more than twice as many people as the 3,500 police thought it did.

On other streets, rows of riot-clad police clashed with protestors who were throwing rocks, and late on Thursday, a historic structure in the city’s historic district caught fire.

The building, on San Martin Plaza, was empty when the massive blaze ignited from unknown causes, a firefighter commander told local radio.

Canada-based miner Hudbay said in a statement that protesters had entered the site of its Peru unit, damaging and burning key machinery and vehicles.

“This has not been a protest; this has been a sabotage of the rule of law,” Prime Minister Alberto Otarola said Thursday evening alongside President Dina Boluarte and other government ministers.

Over the past month, raucous and sometimes deadly protests have led to the worst violence Peru has seen in more than two decades, as many in poorer, rural regions vent anger at the Lima establishment over inequality and rising prices, testing the copper-rich Andean nation’s democratic institutions.

Protesters are demanding the resignation of Boluarte, snap elections and a new constitution to replace the market-friendly one dating back to the days of right-wing strongman Alberto Fujimori in the 1990s.