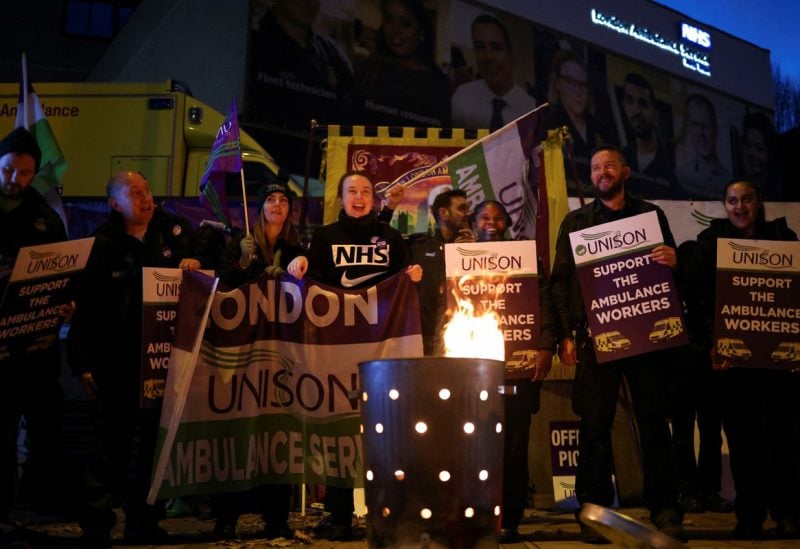 Ambulance workers take part in a strike, amid a dispute with the government over pay, outside NHS London Ambulance Service in London, Britain December 21, 2022. REUTERS/Henry Nicholls/File Photo

The Unison trade union announced on Thursday that after a similar staff walkout on Wednesday, thousands of British ambulance personnel will stage two additional strikes on Jan. 11 and 23 in an intensifying conflict over pay and staffing.

The two Unison strikes scheduled for next month will each last 24 hours, the union said in a statement, in contrast to the 12-hour action on Wednesday that included workers from two other unions.

The walkouts will involve all ambulance employees as opposed to just emergency response crews, although many will be exempted from strike action under emergency cover plans, said the union, which represents the majority of ambulance workers in Britain.

“It’s only through talks that this dispute will end,” Unison General Secretary Christina McAnea said. “No health workers want to go out on strike again in the new year.”

The strikes come as an already pressured health system faces further strain this winter, with nurses also going on strike in a separate pay dispute.

“Strikes are in no one’s best interest least of all patients and I urge unions to reconsider further strike action before walkouts have a worse impact on patients,” he said in a statement.