Thousands of Venezuelans flee to Colombia amid military operations 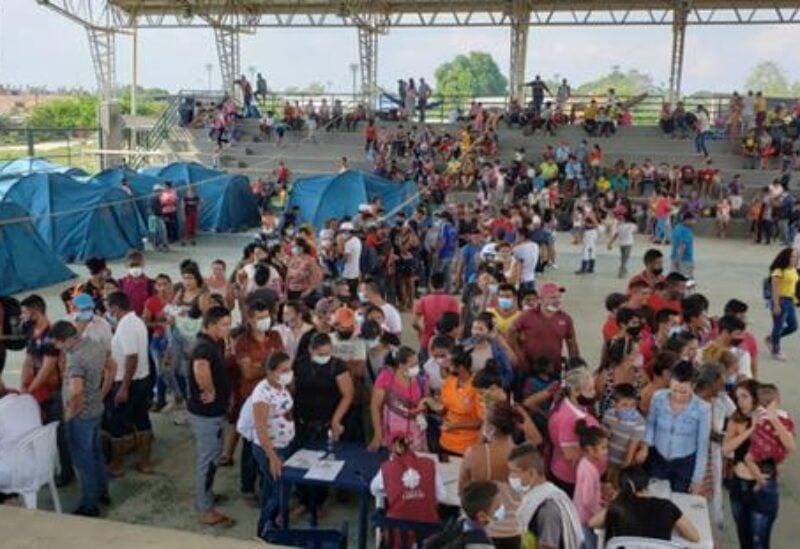 Venezuelan migrants are seen inside a coliseum where a temporary camp is installed, after fleeing their country due to military operations, according to the Colombian migration agency, in Arauquita, Colombia March 22, 2021.

Thousands of Venezuelans have fled to Colombia from their homes in the border province of Apure amid military operations there, said the Colombian government and some of those displaced.

Venezuela has announced that its military is fighting Colombian armed groups in rural areas and has its population’s support.

“When the bombs were falling I felt so nervous,” said 26-year-old Niomar Diaz who arrived in Colombia by canoe. “In one house a grandfather died, an 8-year-old boy died, a 9-year-old girl and her mom. The situation was terrible.”

He added that the Venezuelan military was abusive and his family and many neighbors opted for fleeing. Reuters could not independently verify his account of the deaths or the alleged abuse.

Colombia’s migration agency said in a statement on Wednesday that over 3,200 people in 780 families make up the group, which started arriving in the Colombian municipality of Arauquita on Monday because of the military operations.

The border is currently closed due to the COVID-19 pandemic.

“The foreigners are in 8 shelters in Arauquita municipality and the national government, the governor of Arauca and the international community are making efforts to provide them with assistance,” the agency said.

This week, Colombia’s foreign ministry on Twitter voiced concerns over the situation and called on the international community to contribute help for the displaced.

Venezuela’s foreign minister, Jorge Arreaza, rejected those comments in his own tweet late on Wednesday.

The operations have been conducted against illegal camps of Colombian armed groups to protect civilians, a statement shared by Arreaza said, and two Venezuelan soldiers have been killed.

“Any attempt to breach the territorial integrity of Venezuela will have a forceful reaction,” Arreaza said.

Defense Minister Diego Molano said on Twitter on Wednesday that Colombia will increase military and police presence in the area.

Colombia’s government has vehemently criticized what it characterizes as the Venezuelan government’s protection of Colombian rebels and crime gangs. Venezuela has denied protecting such groups.