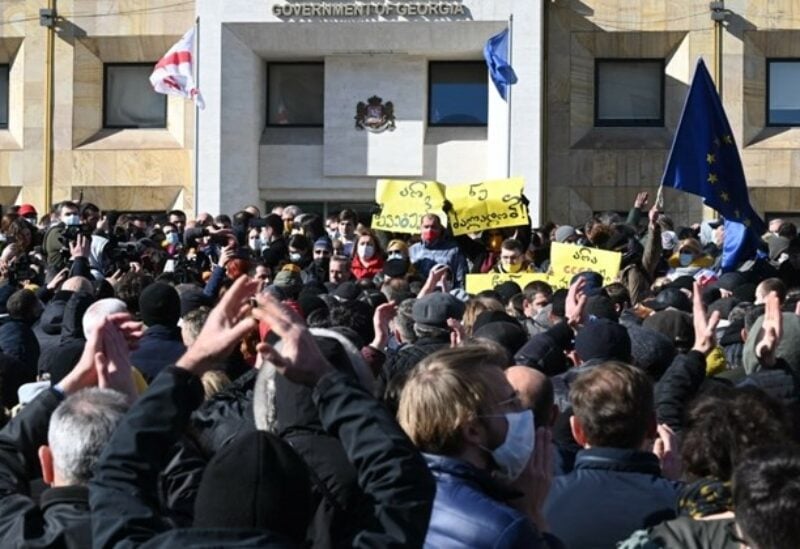 TBILISI: Thousands of anti-government protesters rallied in Georgia Tuesday after the arrest of an opposition leader, deepening a political crisis that erupted after disputed elections last year.

Hundreds of riot police used tear gas against Nika Melia’s supporters who were camped out at his United National Movement party’s headquarters in the capital Tbilisi before he was arrested in an overnight police raid and placed in pre-trial detention.

Scores of Melia’s supporters were also detained in the raid and the leader of the opposition Lelo party called for “a peaceful, unwavering struggle to defend Georgian democracy”.

“Liberation of political prisoners and snap parliamentary elections are the only possible way out of the crisis,” Mamuka Khazaradze said, speaking to journalists on behalf of all opposition leaders.

The US embassy in Georgia said in a statement it was “deeply concerned by the government’s decision to detain the head of a major opposition political party”.

“Force and aggression are not the solution to resolving Georgia’s political differences. Today, Georgia has moved backward on its path toward becoming a stronger democracy in the Euro-Atlantic family of nations.”

“The logic of escalation is getting the upper hand. The political crisis is deepening,” said the EU envoy to Georgia, Carl Hartzell.

British ambassador Mark Clayton wrote on Twitter that he was “shocked by the scenes at UNM headquarters this morning”.

“Polarisation is a result of criminals being in politics, not of so-called politicians being in jail,” he said in a televised statement.

Georgia has been in the grip of a political crisis since parliamentary elections in October, which opposition parties slammed as rigged after Georgian Dream claimed a narrow victory.

Opposition members have refused to take up their seats in the new parliament, in a boycott that had weighed heavily on the ruling party’s political legitimacy. They have also demanded a new vote.

A court in Tbilisi last week had ordered Melia to be placed in pre-trial detention after he refused to pay an increased bail fee ahead of hearings in a case related to anti-government demonstrations in 2019.

He has been charged with “organising mass violence” during the protests and faces up to nine years in prison.

The detention order has raised the stakes in the crisis over the elections.

Georgia’s new Prime Minister Irakli Garibashvili, who was confirmed by parliament on Monday, had said in an address to lawmakers that his government would proceed with Melia’s arrest, warning that the politician “will not manage to hide from justice”.

Garibashvili is a loyal lieutenant of the powerful oligarch Bidzina Ivanishvili, who founded Georgian Dream and is widely seen as the man in charge in Georgia, despite having no official political role.

In power since 2012, Georgian Dream has seen its popularity fall over a failure to address economic stagnation and perceived backsliding on commitments to democracy.