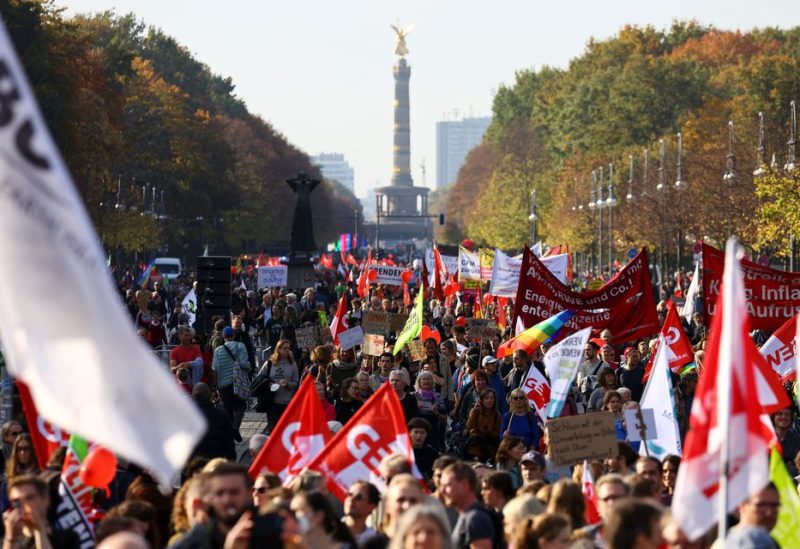 Tens of thousands of protestors rallied in six German cities on Saturday to call for a more equitable allocation of government money to deal with growing energy and living costs, as well as a speedier transition away from fossil fuels.

Protesters marched in Berlin, Düsseldorf, Hannover, Stuttgart, Dresden, and Frankfurt-am-Main, holding placards with messages ranging from lower inflation to the elimination of nuclear power and increased energy price subsidies for the poor.

Around 24,000 people participated, according to Greenpeace, one of the organisers. Police said about 1,800 protesters gathered in Berlin.

“We want to show that we urgently need financial relief for citizens that is socially balanced. The government is doing a lot but it is distributing funds with a watering can. People with lower income need more support than the wealthy,” said Andrea Kocsis, deputy chair of ver.di, one of the unions organising the protests.

Germany’s parliament on Friday approved the government’s 200 billion euro ($195 billion) rescue package which aims to protect companies and households from the impact of soaring energy prices.

The package includes a one-off payment to cover one monthly gas bill for households and small and medium-sized businesses and a mechanism to limit prices from March.

It will also finance a cap electricity prices for households and industry retroactively from March for spot prices and from December for future prices, with additional funding drawn from electricity companies’ profits.

German inflation in September hit its highest level in more than a quarter of a century at 10.9%, driven up by higher energy costs.

“I would find it better if we distributed in a more just way. There are millionaires saying they want to pay more tax. I’m not seeing anything happening on that front,” said Ulrich Franz, a protester in Berlin.