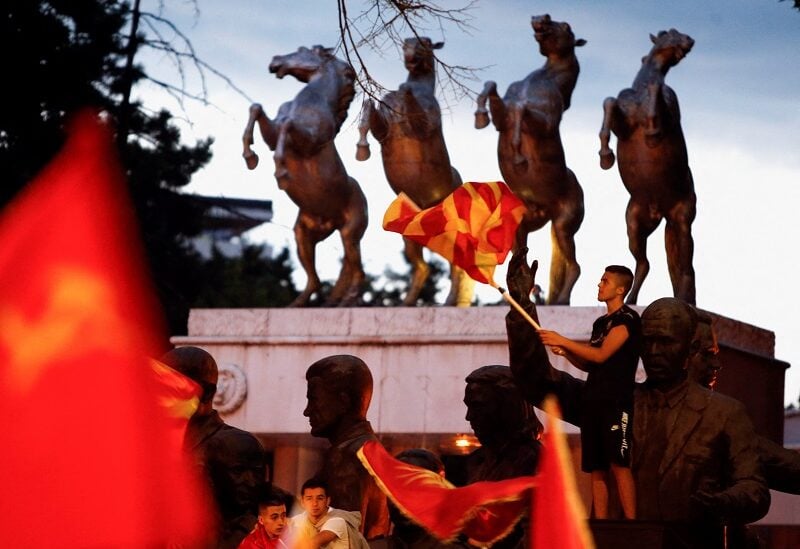 A protest, under the slogan “Ultimatum – No thanks,” continued for an eighth day, where thousands of people gathered Monday in North Macedonia’s capital to protest against a French proposal that seeks to end the country’s dispute with Bulgaria, which is blocking Skopje’s bid to join the European Union.

People began the protest in front of a government building and then walked to the Ministry of Justice and the Parliament building, expressing their dissatisfaction with the proposal.

The demonstrators then dispersed, saying they would continue to protest in the coming days.

Last week, violence broke out when a group of people threw stones, chairs and bottles at the protesters and a man was detained after firing a gun in the air.

Bulgaria has been blocking North Macedonia’s efforts to join the European Union, accusing it of disrespecting historical and cultural ties. Bulgaria has made a number of demands, including the acceptance that the language of North Macedonia is derived from Bulgarian and the recognition of a Bulgarian minority in the country.

French President Emmanuel Macron presented a proposal that included resolving the problems between Bulgaria and North Macedonia within the framework of EU negotiations.

France’s proposal turned into a European proposal after it was approved by all EU member states. It envisaged the lifting of Bulgaria’s two-year veto on North Macedonia’s EU membership.

The Bulgarian parliament in late June voted to lift its veto on negotiations for the accession of North Macedonia to the EU under certain conditions.

The vote came just a day after Ukraine and Moldova were granted EU candidate status, partly in response to Russia’s war in Ukraine.

According to the terms of the parliament, North Macedonia will remain loyal to the agreement signed in 2017 in the field of friendship, good neighborliness and cooperation with Bulgaria during the negotiation process with the EU, Bulgarians in North Macedonia will be registered as a “state-forming element” in the country’s constitution, Macedonian will not be considered a language other than Bulgarian, and the EU will be the guarantor for the implementation of these conditions.

Although Bulgaria was the first country to recognize North Macedonia as a state, there are debates over a shared history that cannot be shared. Discussions on the subject are left to the authority of experts.

North Macedonia has been a candidate country since 2005.