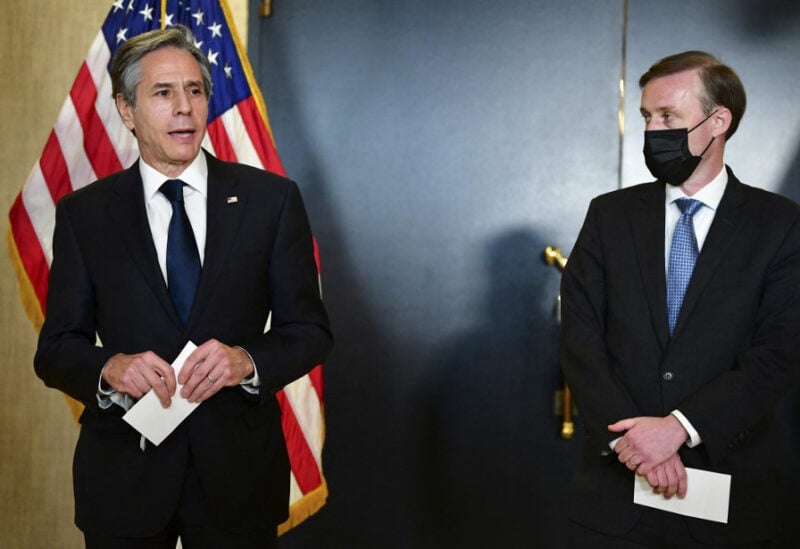 US Secretary of State Antony Blinken (L) and National Security Advisor Jake Sullivan (R) address the media following the closed-door morning talks between the United States and China upon conclusion of their two-day meetings in Anchorage, Alaska on March 19, 2021. (Photo by Frederic J. BROWN / POOL / AFP)

U.S. and Chinese officials concluded on Friday what Washington called “tough and direct” talks in Alaska, which laid bare the depth of tensions between the world’s two largest economies at the outset of the Biden administration.

The two days of meetings, the first high-level in-person talks since President Joe Biden took office, wrapped up after a rare and fiery kickoff on Thursday when the two sides publicly skewered each others’ policies in front of TV cameras.

The talks appeared to yield no diplomatic breakthroughs – as expected – but the bitter rivalry on display suggested the two countries had little common ground to reset relations that have sunk to the lowest level in decades.

The run-up to the discussions in Anchorage, which followed visits by U.S. officials to allies Japan and South Korea, was marked by a flurry of moves by Washington that showed it was taking a firm stance, as well as by blunt talk from Beijing warning the United States to discard illusions that it would compromise.

“We expected to have tough and direct talks on a wide range of issues, and that’s exactly what we had,” White House national security adviser Jake Sullivan told reporters moments after the Chinese delegation left the hotel meeting room.

Members of China’s delegation left the hotel without speaking to reporters, but China’s top diplomat Yang Jiechi later told China’s CGTN television network that the discussions had been constructive and beneficial, “but of course, there are still differences.”

U.S. Secretary of State Antony Blinken said he was not surprised that the United States got a “defensive response” from China after it raised allegations of Chinese human rights abuses in Xinjiang, Tibet, and Hong Kong as well as cyberattacks and pressure on Taiwan.

But Blinken said the two sides also had intersecting interests on Iran, North Korea, Afghanistan, and climate change, and that the United States had accomplished during the meetings what it had come to do.

“On economics, on trade, on technology, we told our counterparts that we are reviewing these issues with close consultation with Congress, with our allies and partners, and we will move forward on them in a way that totally protects and advances the interests of our workers and our businesses,” Blinken said.

China’s State Councilor Wang Yi, who joined the meetings, was quoted by Chinese state television as saying they had told the U.S. side that China’s sovereignty was a matter of principle and not to underestimate Beijing’s determination to defend it.

After pointed opening remarks here on Thursday from Blinken about China’s challenge to a rules-based international order, Yang had lashed out with a long speech criticizing U.S. democracy, and foreign and trade policies.

The United States accused China of “grandstanding” for its domestic audience, and both sides suggested the other had broken diplomatic protocol.

The rebukes played out in front of journalists, but a senior U.S. official told reporters that as soon as media had left the room, the two sides “immediately got down to business” and held substantive talks.

While much of Biden’s China policy is still being formulated, including how to handle the tariffs on Chinese goods implemented by his predecessor Donald Trump, his administration has so far placed a stronger emphasis on democratic values and allegations of human rights abuses by China.

“I am very proud of the secretary of state,” Biden told reporters at the White House on Friday morning when asked about Thursday’s meeting.

Biden and Chinese President Xi Jinping held their first phone call as leaders last month and appeared at odds on most issues, even as Xi said that confrontation would be a “disaster” for both nations. Biden, who referred to Xi as a “thug” during his election campaign, said after the call that the United States needed to raise its game in the face of the Chinese challenge, or China would “eat our lunch.”

In recent weeks, top Republicans have given a nod to efforts by Biden, a Democrat, to revitalize relations with U.S. allies in order to confront China, a shift from Trump’s go-it-alone ‘America First’ strategy.

Biden has partially staked his approach on China to rebuilding American domestic competitiveness, and several top Republicans, whose cooperation will be crucial to the success of those plans, backed his administration in the face of the heated exchanges from the first day of talks.

“I have many policy disagreements with the Biden administration, but every single American should unite against Beijing’s tyrants,” Republican Senator Ben Sasse said in a statement.

While Biden’s two-month old administration is still conducting China policy reviews, Yang and Wang by contrast are veteran diplomats with decades of combined experience handling U.S.-China relations at the highest levels of the Chinese government. They are also fresh off of dealing with the Trump administration and its unorthodox approach to U.S. foreign policy.

China’s social media carried comments saying Chinese officials were doing a good job in Alaska, and that the U.S. side lacked sincerity.

“My sense is that the administration is testing the question of whether it is possible to get real results from these dialogues,” Zack Cooper, who researches China at the American Enterprise Institute in Washington, said of the U.S. side.

China on Friday put a Canadian citizen on trial on spying charges and is set for another Canadian’s trial on Monday, cases embroiled in a wider diplomatic spat between Washington and Beijing.

A senior administration official said the United States had raised the issue with the Chinese in Alaska, including their concerns that Chinese authorities didn’t allow any diplomats to enter the courtroom.