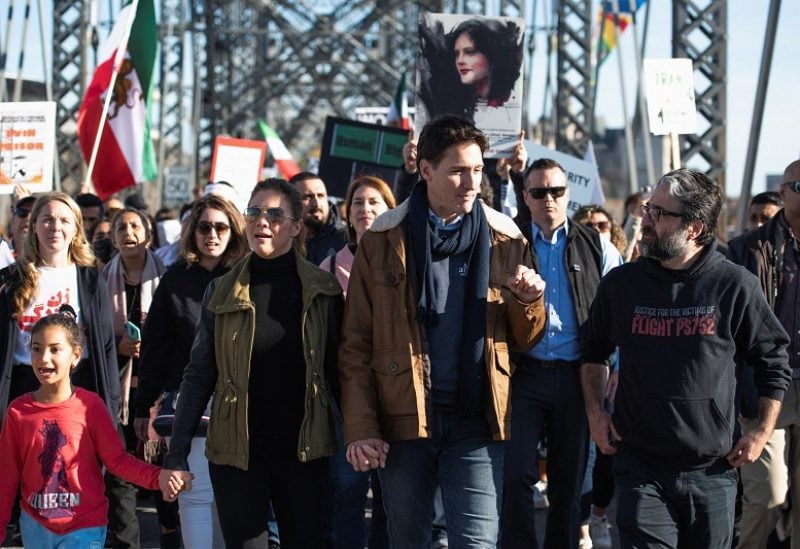 In an act of support for the demonstrations that have swept Iran for more than 40 days, Prime Minister Justin Trudeau marched with protesters in the Canadian capital of Ottawa Saturday.
“The women in Iran, daughters and the grandmothers and the allies… they are not forgotten,” Trudeau said, standing in front of a white banner covered with dozens of red hand prints.
Iran has been gripped by six weeks of protests that erupted when Mahsa Amini, 22, died in custody after her arrest for an alleged breach of Iran’s strict dress rules for women.
“We will stand with you. I’ll march with you, I will hold hands with you. We will continue to stand with this beautiful community,” Trudeau said, before ending his speech by shouting Persian slogans, his fist raised.
The prime minister’s wife, Sophie Gregoire Trudeau, also joined the protest, saying, “I stand with you because when one woman’s right is being denied, it is a sign of disrespect for all women.”
“And we will leave no sister behind.”
Trudeau highlighted several rounds of sanctions imposed by the Canadian government against senior Iranian officials over the last month, levied due to the regime’s “gross and systematic human rights violations.”
Amini supporters also attended rallies in other Canadian cities, including Vancouver, Montreal and Toronto, where marchers formed human chains.
And thousands also protested Saturday in Paris and throughout France.