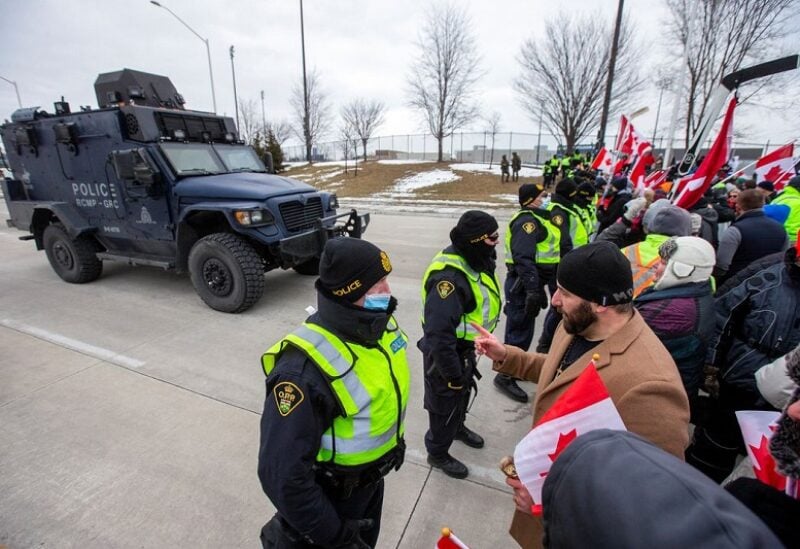 Protesters interact with police officers, who stand guard on a street after Windsor Police said that they are starting to enforce a court order to clear truckers and supporters who have been protesting against coronavirus disease (COVID-19) vaccine mandates by blocking access to the Ambassador Bridge, which connects Detroit and Windsor, in Windsor, Ontario, Canada February 12, 2022. REUTERS/Carlos Osorio

Canadian Prime Minister Justin Trudeau will inform provincial premiers of his intention to invoke special measures to give the federal government extraordinary powers to deal with protests that have shut some border crossings with the United States and paralyzed parts of Canada’s capital, CBC News said on Monday.

Citing unnamed sources, CBC said Trudeau planned to invoke the Emergencies Act, a rarely used provision that allows the federal government to override the provinces and authorize special temporary measures to ensure security during national emergencies anywhere in the country.

It has only been used once in peacetime – by Trudeau’s father, former Prime Minister Pierre Trudeau – during the so-called “October Crisis” in 1970. It was invoked twice during the two world wars, when it was known as the War Measures Act.

The CBC said Ottawa had no plans to send in the military.

A six-day blockade of North America’s busiest trade corridor in Windsor, Ontario, ended on Sunday while protests in Ottawa entered a third week.

The “Freedom Convoy” protests, started by Canadian truckers opposing a vaccinate-or-quarantine mandate for cross-border drivers, have turned into a rallying point for people opposing the policies of Trudeau’s government, covering everything from pandemic restrictions to a carbon tax.