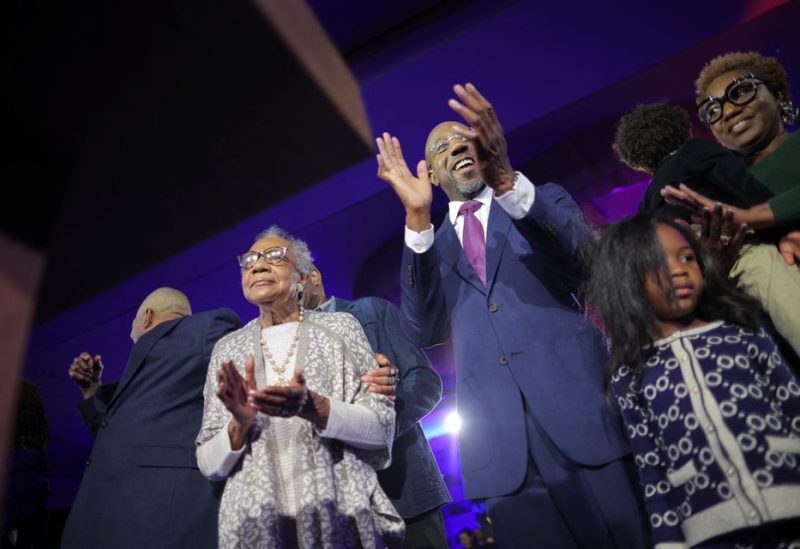 U.S. Senator Raphael Warnock (D-GA) is joined on stage by his mother Verlene Warnock and his daughter Chloe and son Caleb during an election night party after a projected win in the U.S. midterm runoff election between Warnock and his Republican challenger Herschel Walker in Atlanta, Georgia, U.S., December 6, 2022. REUTERS/Carlos Barria

Here are some takeaways from Warnock’s victory:

At the beginning of the cycle, Republicans entertained hopes that they could take control of both chambers of Congress, as they only needed to add gain one seat to break the 50-50 Senate deadlock.

Instead, they watched as Trump-endorsed candidates Mehmet Oz in Pennsylvania, Blake Masters in Arizona and Don Bolduc in New Hampshire went down to defeat. All were ostensibly winnable races.

After Warnock’s win, Democrats now will have 51 seats in the new Senate. Republicans won a majority in the House of Representatives, albeit far narrower than the “red wave” some in the party had hoped for.

Warnock won the critical suburban counties outside Atlanta on Tuesday.

Walker was one of Trump’s earliest endorsements. The former Georgia college football star’s campaign was plagued from the outset by questions about his personal life, his fitness for office, and whether he actually resides in Texas.

Trump held two rallies for Walker in Georgia, but did not come to the state for the runoff, only phoning in to boost supporters on Monday night. He spent much of Monday instead sending out statements demanding that the 2020 election be overturned due to his phantom claims of election fraud.

Other Republican luminaries such as Florida Governor Ron DeSantis, widely expected to enter the 2024 presidential race along with Trump, also kept their distance from Walker.

At a gathering of Republican donors in Las Vegas last month, Trump came under fire from several major donors and potential 2024 candidates who argued that he was alienating independent and moderate Republican voters. Walker’s loss is likely to intensify that criticism and further weaken Trump’s standing in the party.

Even though Trump never traveled to Georgia to campaign for Walker in the final weeks, he made news in other ways that were likely to alienate centrist voters.

He announced his new 2024 presidential campaign a week after the Nov. 8 midterm vote. Almost immediately, the Justice Department declared that it was appointing a special counsel to further probe Trump’s actions regarding his efforts to overturn the 2020 election and his alleged removal of classified documents from the White House.

Trump then was caught having dinner at his Florida resort home with an avowed white nationalist, Nick Fuentes, along with hip-hop artist Kanye West, who has of late trafficked in anti-Semitic remarks. Trump denied that he knew who Fuentes was.

More recently, Trump has renewed his calls to have the 2020 election vacated in online remarks in which he appeared to be suggesting that tenets of the U.S. Constitution be subverted.

That forced uncomfortable congressional Republicans to respond to Trump’s statements in the days before the runoff election, pulling the focus from Walker’s candidacy.

Walker was a troubled candidate from the start. His tumultuous personal life, which included allegations of domestic abuse and encouraging former girlfriends to get abortions, made for easy fodder for Democratic attack ads. Walker denied the abortion allegations.

Clearly overwhelmed by the demands of a Senate campaign, he rarely ventured from friendly areas and mostly cut himself off from the media. In a state that had recently re-elected a Republican governor, Brian Kemp, Walker seemed unable to connect with voters beyond the rural base.

That stayed true even when conservative heavyweights such as Kemp, former U.N ambassador Nikki Haley and Senator Ted Cruz rushed to his aid in the closing weeks. A political action committee run by the Senate’s top Republican, Mitch McConnell, tried to bail him out as well.

At one rally prior to the runoff, Walker publicly mused about whether a werewolf could kill a vampire. That inspired a Warnock attack ad as voters began to go to the polls.

At Warnock’s victory party on Tuesday, Alma Hill, a Warnock supporter, said she was worried that Walker had been able to force a runoff.

“I don’t know why we are still dealing with a werewolf,” Hill said.

Warnock was announced as the winner soon thereafter.