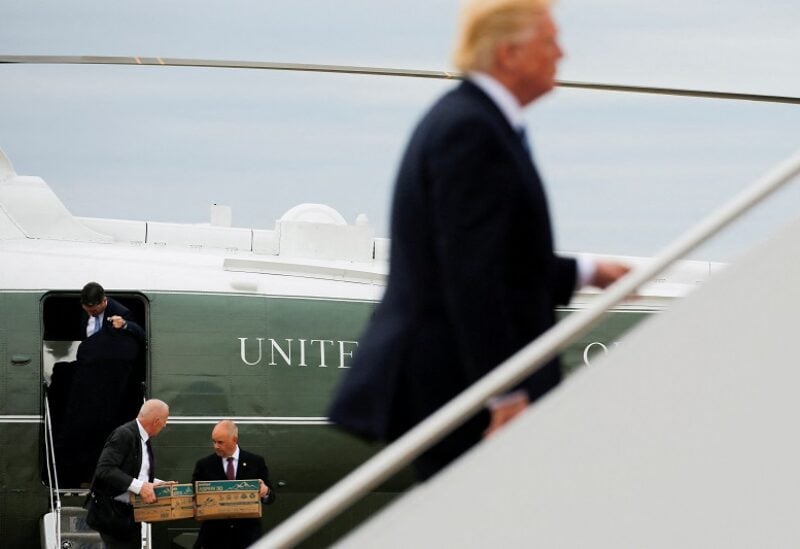 White House aides, including Keith Schiller, carry file boxes aboard as U.S. President Donald Trump boards Air Force One for travel to New York from Joint Base Andrews, Maryland, U.S. May 4, 2017. According to a report published in the New York Times, the boxes Trump would travel with contained documents including "unanswered letters, unread briefing books and unread newspapers." REUTERS/Jonathan Ernst

Retaliating against Biden’s assertion that Trump supporters are undermining American democracy, the latter called sitting President Joe Biden an “enemy of the state”. This was Trump’s first public appearance since August 8 FBI raid on his Florida home. He was speaking at a rally in Pennsylvania. He said that FBI raid was a “travesty of justice” and warned it would produce “a backlash the likes of which nobody has ever seen.”

“There can be no more vivid example of the very real threats from American freedom than just a few weeks ago, you saw, when we witnessed one of the most shocking abuses of power by any administration in American history,” Trump claimed.

Long-standing protocols in the US mean that the Justice Department and the FBI act independently of the White House.

Trump told cheering supporters at the “Save America” gathering in the city of Wilkes-Barre that the “egregious abuse of the law” was going to produce “a backlash the likes of which nobody has ever seen.”

He also slammed Biden’s remarks this week. Biden said that Trump and his supporters “represent an extremism that threatens the very foundations of our republic.”

Speaking in Philadelphia, the cradle of US democracy, on Thursday, the president launched an extraordinary assault on those
Republicans who embrace Trump’s “Make America Great Again” ideology — and urged his own supporters to fight back in what he billed as a “battle for the Soul of the Nation.”

Trump slammed it as the “most vicious, hateful and divisive speech ever delivered by an American president.”

“Republicans in the MAGA movement are not the ones trying to undermine our democracy,” continued Trump, who has repeatedly claimed the 2020 presidential election, which he lost, was rigged; and whose party has made unfounded claims of voter fraud a central plank of their platform.