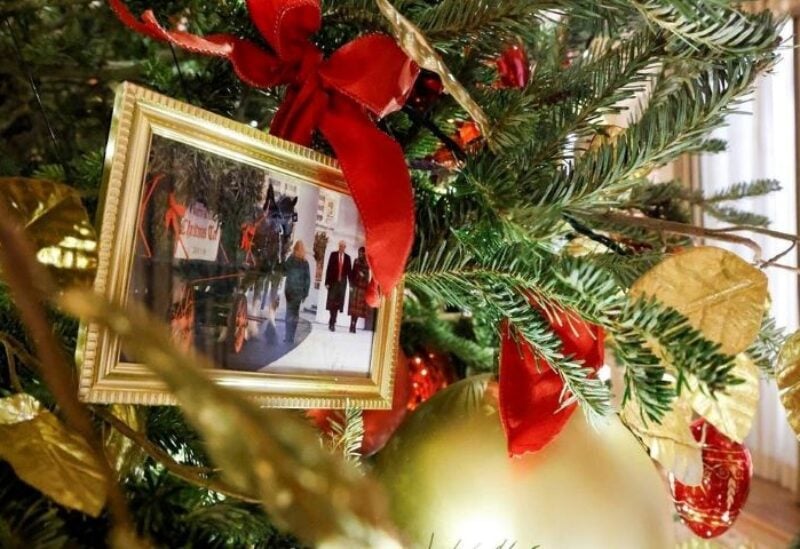 Christmas trees in the State Dining Room with ornaments of former US President Donald Trump and his wife, Melania Trump

Former US President Donald Trump has returned to the White House, at least in the shape of a photograph hanging on the Bidens’ Christmas tree, which was displayed on Monday.

It’s hardly an exaggeration to say there’s bad blood between the Trumps and the Bidens, owing partly to Trump’s continued campaign to persuade Americans that Joe Biden didn’t truly beat him in the 2020 presidential election.

However, First Lady Jill Biden’s “Gifts from the Heart” theme for this year’s Christmas decorations is spreading holiday cheer.

A gold-framed portrait of Trump and his wife Melania hangs on the State Dining Room tree, alongside photos of the Obamas, the Bushes, the Reagans, and the Carters.

Democrats Bill and Hillary Clinton are also included to the presidential tree.

A corridor is decorated with more images of prior first families, including Trump. Framed Christmas greeting cards from Biden, Obama, and Trump hang on another wall.

The Christmas reconciliation contrasts with the Trumps’ and Bidens’ acrimonious relationship.

In another departure from the White House’s more genteel conventions, Trump never welcomed his Democratic predecessor Barack Obama for an official picture presentation.

In addition, the Republican has yet to get his own portrait displayed in Biden’s White House.