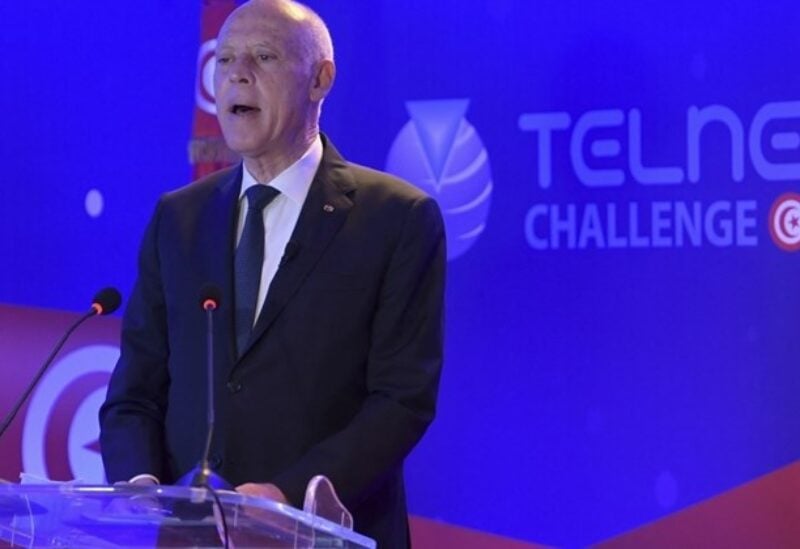 Tunisian President Kais Saied delivers a speech following the launch of Russia's Soyuz-2.1a carrier rocket from the Baikonur cosmodrome in Kazakhstan carrying 38 foreign satellites among them Tunisia's first satellite Challenge-1, at Telnet telecommunications group in the capital Tunis on March 22, 2021.

Tunisia celebrated the launch Monday of its first domestically made satellite, hoping it will inspire young engineers to reach for the stars at home rather than join those emigrating overseas.

Challenge-1, built by a team from telecommunications giant TelNet, blasted off along with 37 other satellites aboard a Russian Soyuz rocket from the Baikonur cosmodrome in Kazakhstan on Monday.

That made Tunisia the 6th African country to manufacture its own satellite and see it reach space.

“It’s a source of pride to have taken part in this project,” said 27-year-old Khalil Chiha, who trained at Tunisia’s National Engineering School in the central city of Sfax. “Working in the aeronautical or aerospace sector is a dream.”

Tunisia had been struck by an economic crisis and spiraling unemployment even before the spread of COVID-19, and recent months have seen growing anti-government demonstrations.

Many of the Challenge-1 engineers were educated in Tunisia and are aged between 25 and 30 years old.

Officials hope the success will show young people there is a future for them in the North African nation.

The Challenge-1 is set to gather data including pollution, temperature and humidity readings over regions without internet coverage, as part of efforts to collect such information from areas beyond terrestrial phone networks.

“We are very emotional, after 3 years of intense work,” said engineer Haifa Triki, 28, who followed the flight live from Tunis. “We made a lot of sacrifices, but it was worth it”.

President Kais Saied, joined engineers and journalists to watch the launch live on screen at TelNet headquarters in Tunis.

“Our real wealth is the youth who can face obstacles,” Saied said, noting that Tunisia lacks not resources but “national will” amid its dire political and social crises. “We are proud of our youth,” he said.

The Challenge-1 team was supported by expatriate Tunisian engineers, one of whom took part in NASA’s Mars Perseverance mission.

“It really is a dream come true,” TelNet project manager Anis Youssef told AFP, ahead of the launch.