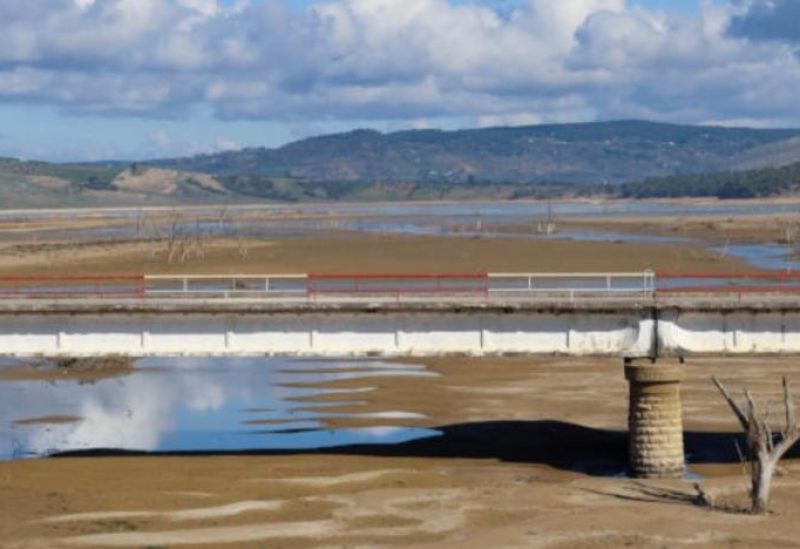 A view shows a bridge over Sidi El Barrak dam with depleted levels of water, in Nafza, west of the capital Tunis, Tunisia, January 7, 2023.

Three years of drought have dried up Tunisian reservoirs, threatening harvests that are critical to the country’s battered economy and pushing the government to raise tap water prices for homes and businesses.

Since September only 110 million cubic meters of rain fell in Tunisia, about a fifth of the normal rate, and officials in the farmers union and the main trade union warn that grain crops will suffer – adding to existing problems of food supply.

“The situation is very dangerous because of years of continuous drought,” said Hammadi Habib, an Agriculture Ministry official. “Dams are only at 25% of their capacity and some dams have only 10%,” he added.

As climate change has accelerated, bringing blistering heat across the Mediterranean region in recent summers, winter rains have repeatedly diminished in North Africa, causing problems for agriculture from Morocco to Tunisia, Reuters reported.

At the Sidi El Barrak dam in Nafza, 140km (80 miles) west of the capital Tunis, the dry ground behind a dam is cracked, with trees slowly dying – the result of another failure of rainfall.

Empty dams across the fertile northern hills and eastern plains are alarming farmers who produce crops of olives and wheat that once made Tunisia a breadbasket to the ancient world.

Olive oil is still the country’s most important export. In the rural region of Siliana, farmer Hatem Nafroudi was filling his tanker truck with water from a depleted dam, confusion and gloom on his face.

“I’m not used to watering almond and olive trees in winter. But because of this drought, here I am,” he said, lamenting what he called the worst season of rainfall in decades.

Tunisia already has food supply problems thanks to high global prices and the government’s own financial difficulties, which have reduced its capacity to buy imported food and subsidize farms at home.

The drought has pushed up fodder prices, contributing to a crisis for Tunisia’s dairy industry as farmers sell off herds they can no longer afford to keep, leaving supermarket shelves empty of milk and butter.

As the government tries to prioritize grain staples and export crops, it has urged farmers to stop irrigating vegetable fields with water from dams.

In a further urgent measure, authorities have also in some cases limited supply to farms to make sure there will be enough drinking water for homes and businesses.

As it wrestles with both its own fiscal problems and the need to reduce any excessive consumption, the government has raised water prices on a sliding scale with bigger increases for the heaviest users and wealthier economic sectors.

All those measures have pushed up vegetable prices, adding to inflation of over 10% last month that is driving public anger at President Kais Saied and the government he appointed after seizing most powers in 2021.

“It is time for the authorities to declare a state of water emergency,” said Radhia Smine of the Tunisian Observatory of Water.

“If we stay silent we will reach the state of thirst. Thousands of families will lack drinking water,” she added.

“If we do not take decisions in January to reduce irrigation water and ration water use now to prioritize drinking water… then for sure in August we will not have drinking water in the capital or coastal regions,” said Habib, the agriculture ministry official.