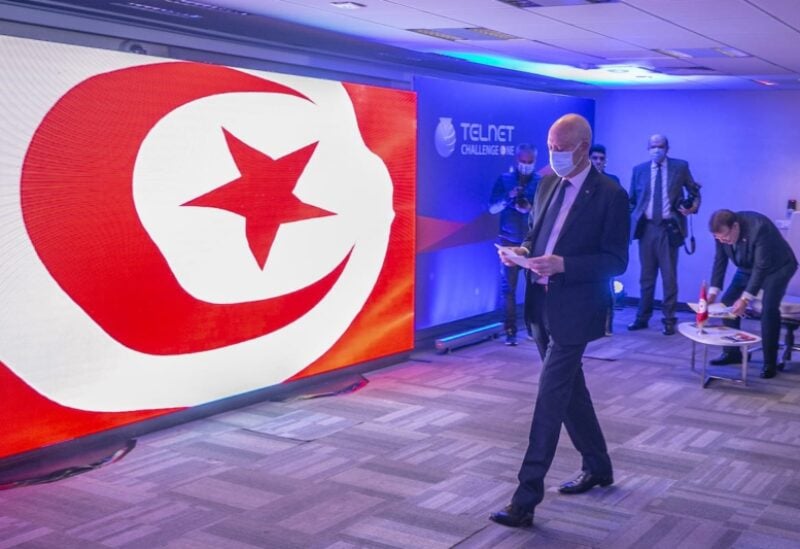 Amid the absence of a “government emanating from institutions and elections” that have the “legitimacy” to involve in such a debate, the Tunisian General Labour Union, UGTT, expressed its rejection of the reforms demanded by the International Monetary Fund (IMF) to grant the country a new loan.

The UGTT’s position comes after it has approved and conducted a one-day general strike in the government sector last Thursday, through which it paralysed the country to protest against the government’s refusal to negotiate the issue of increasing employee remuneration.

The UGTT Secretary General, Noureddine Taboubi, responded to the announcement of the IMF about its “readiness” to launch negotiations with Tunisia soon by saying: “We reject the conditions of the International Monetary Fund due to the low wages, poor resources and the high rate of poverty and unemployment.”

Tunisia held preliminary discussions with the IMF to obtain a new loan to save its economy, which is suffering from a high unemployment rate (16.1 per cent), inflation of (7.8 per cent) and a large public debt.

The UGTT’s refusal may complicate matters and increase pressure on President Kais Saied, who is preparing to hold a popular referendum to amend the 2014 Constitution amid a tense political atmosphere.
Tunisia requested a four-billion-Euro loan from the IMF in exchange for implementing reforms; however, observers believe that Tunisia will not be able to get more than two billion Euros.

The IMF announced on Wednesday that it is “ready to start negotiations during the coming weeks on a program” that aims to support Tunisia, provided that it implements reforms.

The IMF said in a statement that this decision was taken after “a series of technical discussions lasted for several months with the Tunisian authorities.”

In his statements to reporters, Taboubi continued by saying: “I say it clearly, the current government is provisionally appointed by decree, so when there is a government emanating from institutions and elections, it will have the legitimacy to initiate discussion on reforms.”

“We are against the agonising and painful options that they are talking about. We support reform, but we do not share the same view of reform with the current government and successive governments,” Taboubi added.

The government’s reform plan includes freezing the bill of the public sector wages, reviewing the subsidising policy of some basic materials and restructuring some public companies that are experiencing a difficult financial situation.

The UGTT supported Saied’s decisions on 25 July; however, it refused to participate in the national dialogue approved by Saied to amend the Constitution.

Earlier this week, the Director of the Middle East and Central Asia Department at the IMF, Jihad Azour, began a visit to Tunisia and met President Kais Saied and Prime Minister Najla Bouden.
A group of ministers announced that the government will commence reviewing the subsidising policy for some basic materials.

After he met with the IMF’s official, Saied affirmed the “necessity to implement major reforms, taking into account the social dimensions, reminding that there are many guaranteed human rights in this context such as the right to health and the right to education, which are not subject to profit and loss standards.”

In a statement, the IMF quoted Azour saying: “Due to the severe repercussions of the war in Ukraine, the need for speedy implementation of a set of ambitious reforms becomes more urgent.”

The official stressed that reforms should benefit the people.
If the IMF approves the new fund, this will represent a good indication to the international donors and gives Tunisia strong backing to reach the international markets and request other loans from other donors.

This is demonstrated through a previous statement by the Governor of the Central Bank of Tunisia, Marouane El Abassi, who considered that the new financial support from the IMF is “indispensable” and “necessary for Tunisia” because it will enable “financing at a reasonable cost and will open the way for the country to borrow from the foreign financial markets and international donors.”

In its statement, the IMF considered that “Tunisia must urgently handle the imbalances of its public finances by increasing tax justice,” including “substituting the generalised subsidy system with transfers directed to the poor and enhancing the social safety net.”

After months of political impasse, Saied, who was elected at the end of 2019, announced his control over all executive and legislative powers on 25 July; he dismissed the Prime Minister and suspended Parliament before dissolving it in March.

Meanwhile, the Tunisian President faces strong opposition from judges, who are carrying out a strike in all Tunisian courts for the third week to express their denouncement of Saied’s decision to dismiss 57 judges.

On Thursday, dozens gathered in front of the Palace of Justice in the capital, Tunis, and chanted slogans such as “No to subjugation of the judiciary”.