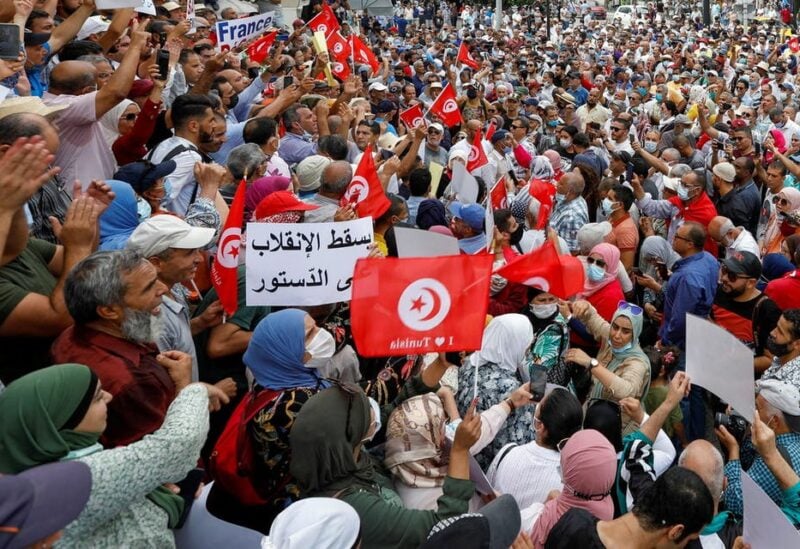 Opponents of Tunisia's President Kais Saied take part in a protest against what they call his coup on July 25, in Tunis, Tunisia September 18, 2021. (Reuters)

Several hundred demonstrators gathered in Tunis on Saturday to protest against Tunisian President Kais Saied’s seizure of governing powers in July, which triggered a constitutional crisis and prompted accusations of a coup.

The protesters gathered in the center of the capital chanting “shut down the coup” and “we want a return to legitimacy”, while a few dozen Saied supporters held a counter demonstration chanting “the people want to dissolve parliament”.

The protest, accompanied by a heavy police presence, was the first since Saied declared on July 25 he was sacking the prime minister, suspending parliament and assuming executive authority.

Saturday’s protests may provide an indication of how the security services, many of whose leadership are newly appointed by Saied, will handle public opposition to him.

Police appeared to be treating both sets of protesters equally, standing between the two camps outside the ornate belle epoque theatre on Habib Bourguiba avenue.

Saied’s moves were broadly popular in a country chafing from years of economic stagnation and political paralysis, but they have raised fears for the new rights and the democratic system won in the 2011 revolution that sparked the “Arab spring”.

Though the biggest party in parliament, the Islamist Ennahda, initially decried his move as a coup, it quickly backed down and the period since Saied’s intervention has been calm.

However eight weeks on, Saied is still to appoint a prime minister or declare his longer-term intentions.

A Saied adviser told Reuters this month the president was considering suspending the 2014 constitution and putting a new version to a referendum, a possibility that unleashed the broadest and most vocal opposition to him since July 25.

Meanwhile, with their immunity lifted, some parliamentarians have been arrested, while numerous Tunisians have been stopped from leaving the country.

Saied has rejected accusations of a coup and his supporters have presented his moves as an opportunity to reset the gains of Tunisia’s revolution and purge a corrupt elite.

“They are only here to … protect corrupt people and Islamists,” said Mohamed Slim, standing with his son in the counter protest.