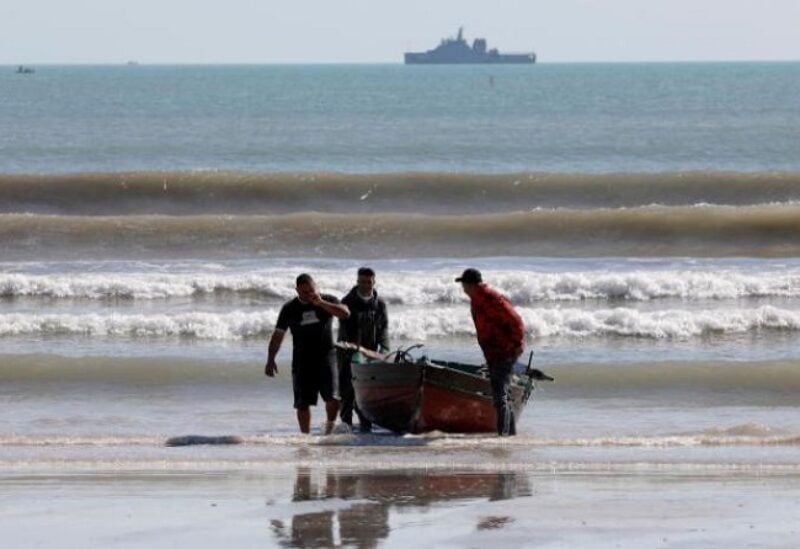 Men stand next to a boat on a beach as a military boat is seen in the background off the coast of Gabes, where a merchant fuel ship sank

A team of divers from the Tunisian navy completed inspecting the hull of a tanker loaded with 750 tons of fuel that sank off southeast Tunisia, the presidency said in a statement on Monday.

It was able to determine the areas that require rapid intervention and ensured the fuel shipment is still sealed, the statement added.

The operation was carried out in cooperation with all relevant authorities, especially the ministries of environment and transportation, as well as local authorities in Gabes.

The statement affirmed that the leaked fuel observed on the surface of the waters off the Tunisian coast came from the engines of the ship that sunk on Friday and was in limited quantity.

Meanwhile, local suspicions are growing about the procrastination in leaving Tunisia’s coast and exposing the ship to sink to obtain compensation from insurance companies.

Former Minister of State Property Mabrouk Kourchid said this ship appeared to be sailing with forged documents after preliminary investigations revealed it does not have a shipping certificate.

Kourchid further pointed that it changed the flag of the African country it raised upon sailing.

“Evidence shows that it is a fuel smuggling operation, and the smugglers sank it.”

He said the Tunisian authorities will be held partly responsible for allowing “a rogue ship without legal documents to enter its territorial waters.”

Meanwhile, Tunisia said some countries have offered to help it prevent damage to the environment.

The Equatorial Guinea-flagged Xelo began taking water around seven kilometers (over four miles) offshore in the Gulf of Gabes and the engine room was engulfed, according to a Tunisian environment ministry statement.

Tunisian authorities rescued the seven-member crew, who received first aid and were being accommodated in a hotel.