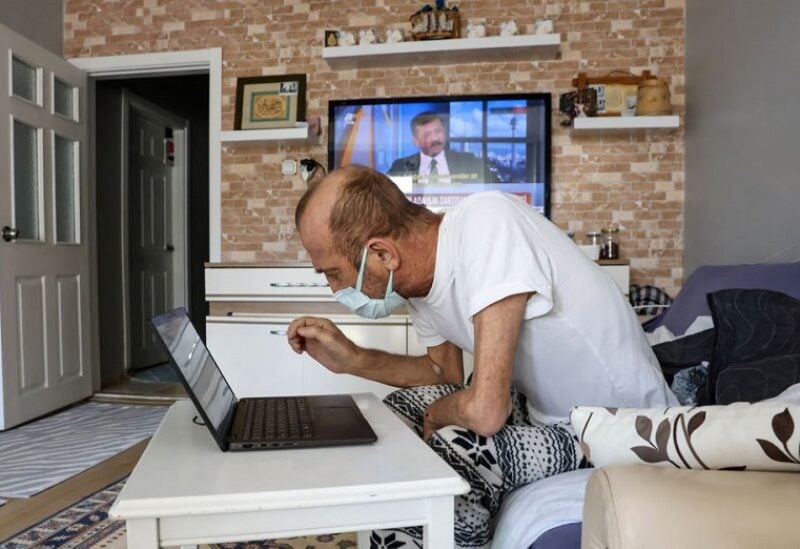 Muzaffer Kayasan, a Turkish man who has taken 78 coronavirus disease (COVID-19) tests and every one has come back positive, leaving him isolated from his family for 14 straight months, checks his test results on a computer in Istanbul, Turkey February 10, 2022. REUTERS/Umit Bektas

When Muzaffer Kayasan first caught COVID-19, he thought he was destined to die since he was already suffering from leukemia. Fourteen months and 78 straight positive tests later, he is still alive – and still battling to shake off the infection.

Kayasan, 56, has Turkey’s longest recorded continuous COVID-19 infection, doctors say, possibly due to a weakened immune system from the cancer. Despite being in and out of hospital since November 2020, his spirits have been high.

“I guess this is the female version of COVID – she has been obsessed with me,” Kayasan joked last week as he found out that his latest PCR test was, yet again, positive.

Nine months in hospital and five months mostly alone in his flat have separated him from much of the outside world, including his granddaughter, Azra, who stays in the garden while visiting, talking through the glass back door.

“I will play with you when I get well,” he told her through a mask after giving her a plastic toy telephone.

Coronavirus patients with immunosuppression are at risk of prolonged infection with severe acute respiratory syndrome, according to a study published last year in the New England Journal of Medicine. Another by the Leukemia & Lymphoma Society shows one in four blood cancer patients do not produce detectable antibodies even after receiving two vaccine shots.

Kayasan’s doctor, Serap Simsek Yavuz, infectious diseases and clinical microbiology professor at Istanbul University, said his is the longest case they have tracked and it is being closely monitored for any risk of a mutated variant.

“The case of a patient testing positive for 441 days is not something that has been reported until today,” said Cagri Buke, doctor of infectious diseases and clinical microbiology at Acibadem Hospital.

The positive tests make Kayasan ineligible for a vaccine, according to Turkish guidelines that say positive patients must wait for a full recovery to receive a shot. Kayasan, who lost his sense of taste and smell through the ordeal, has appealed to authorities to at least ease his confinement.

His son, Gokhan Kayasan, said his father had always been a “positive” person – just not in this way.

“We kept saying how positive he is and now the guy turned positive (for COVID) and can’t go back to negative,” he said. “He says he got stuck at the red light and can’t pass that.”