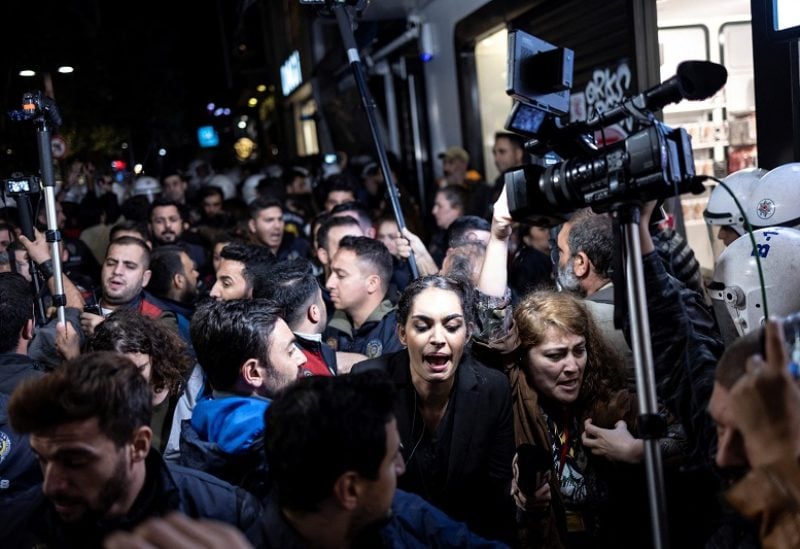 Riot and plain clothes police officers scuffle with journalists as they try to film a protest about the detention of the head of the Turkish Medical Association (TTB), Sebnem Korur Fincanci, over statements she made last week in which she commented on alleged chemical weapons' use by the Turkish armed forces in Istanbul, Turkey, October 26, 2022. REUTERS/Umit Bektas

After she called for a probe into the army’s alleged use of chemical weapons against Kurdish militants, Turkish police on Wednesday arrested the head of Turkey’s doctors’ union, prosecutors said.
Sebnem Korur Fincanci was being detained on “terror propaganda” charges, said the prosecutor’s office.
Turkey has rejected the allegations made in media outlets close to the outlawed Kurdistan Workers’ Party (PKK) that its army was using chemical weapons in operations in northern Iraq.
Fincanci, head of the Turkish Doctors’ Union, said she had examined video images and told AFP last week that she had only called for “an effective investigation” into the allegations.
The Ankara chief prosecutor’s office said in a statement Wednesday Fincanci had been detained over “her comments made to the so-called media organ of the armed terror organization PKK.”
The PKK is listed as a terror group by Turkey and its Western allies.
The prosecutor’s office called for Fincanci to be stripped of her position as the head of the union and a new chair to be elected.
President Recep Tayyip Erdogan had on Monday accused Fincanci of “speaking the language of terrorism” and said she could not remain at the top of the doctors’ union.
“If necessary, we will ensure that this name is changed by legal regulations,” he said after a weekly cabinet meeting.
The PKK has kept up a deadly insurgency for Kurdish self-rule in southeastern Turkey since 1984.
The Turkish army has launched successive operations against the militant group’s rear bases in northern Iraq, a persistent thorn in Ankara’s ties with the Baghdad government.
Defense Minister Hulusi Akar on Monday said the Turkish armed forces had “no chemical weapons.”
“This is out of the question,” he added, slamming the claims as “vile slander.”
Turkish officials have tightened the government’s grip on opposition media ahead of a crucial election in June, when Erdogan will seek a third term.
At least 20 demonstrators and one journalist were arrested in Istanbul on Wednesday, according to an AFP team at the scene, after several dozen people protested against Fincanci’s arrest.
Some were also protesting the detention a day earlier of 11 journalists working for pro-Kurdish media outlets in Istanbul and other cities on charges of making news “inciting people to hatred and enmity.”
In the southeast city of Diyarbakir, a few dozen journalists earlier Wednesday protested the detentions, calling for the release of their colleagues, an AFP journalist reported.
The pro-Kurdish opposition HDP party has condemned what it called “this aggressive and inhuman approach” by the police.
“Sadly, we can expect oppression against democratic institutions in opposition to rise systematically as we approach the elections in 2023,” the party added.