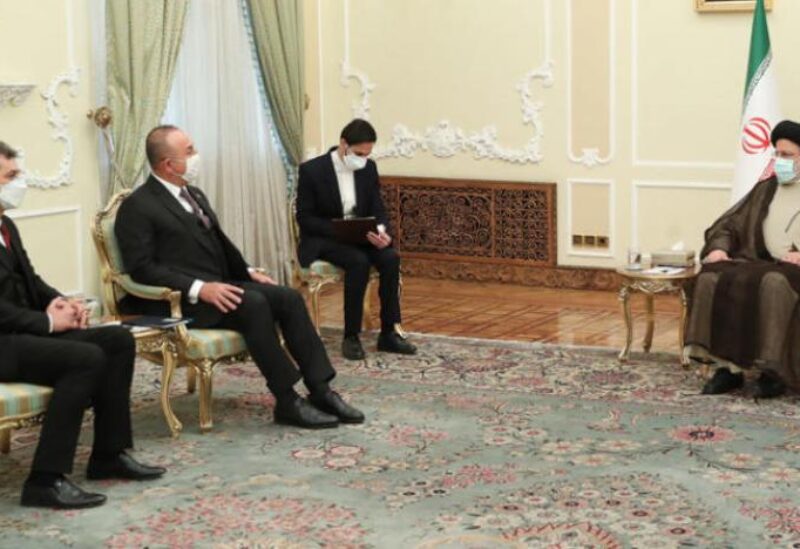 Iran and Turkey agreed to draw a road map for comprehensive long-term cooperation to bolster their bilateral relations.

Cavusoglu also met Iranian President Ibrahim Raisi and announced that both countries would determine a roadmap for long-term comprehensive cooperation.

The two parties addressed regional issues, including Afghanistan and Syria, and discussed preparations for the seventh meeting of the Iran-Turkey high-level cooperation council.

Cavusoglu said: “We hope to hold it within this year.”

Turkish President Recep Tayyip Erdogan will visit Tehran before the end of this year, announced the minister.

Cavusoglu later tweeted that he discussed “bilateral relations, including trade, investments and the fight against terrorism and the latest developments in our region with President Raisi of Iran. We reaffirmed our mutual will to further develop our relations.”

Raisi said the close relations between Iran and Turkey are in the interest of peace and stability in the region, adding that the “regional cooperation between the two countries should be turned into international cooperation.”

In a joint press conference with his Iranian counterpart following their talks, Cavusoglu said that “unilateral sanctions against Iran are wrong.”

“I think we can make a significant contribution to the stability of Iraq as two countries. We will continue our cooperation in the Astana format in Syria. We would like to hold meetings both at the level of state leaders and at the level of foreign ministries in the coming period,” he added.

For his part, Amir-Abdollahian said the two sides agreed on a roadmap for long-term cooperation, adding that there was a “lot of consensus” between them on regional issues.

He indicated that the discussions also dealt with bilateral trade, private sector investments, and the practical lifting of trade barriers.

He hoped that a document on long-term cooperation between the two sides would be signed during a visit by the Turkish President to Tehran without specifying the date.

Commenting on the Yemeni crisis, he said both Iran and Turkey hoped the civil war in Yemen would end as soon as possible, adding that Lebanon’s situation is worrisome.

He further said that both officials condemned the recent terrorist drone attack against Iraqi premier Mustafa al-Kadhimi, expressing hope that the country’s new government would be formed as soon as possible.

He indicated that it comes within consolidating relations between the two countries, noting that the officials also discussed border issues and management of shared water resources.

Referring to Turkey’s Ilisu dam on the Tigris river, Khatibzadeh noted that all downstream countries are affected by every decision at the regional and local level, stressing that everyone must think globally and decide jointly to tackle environmental and human issues.