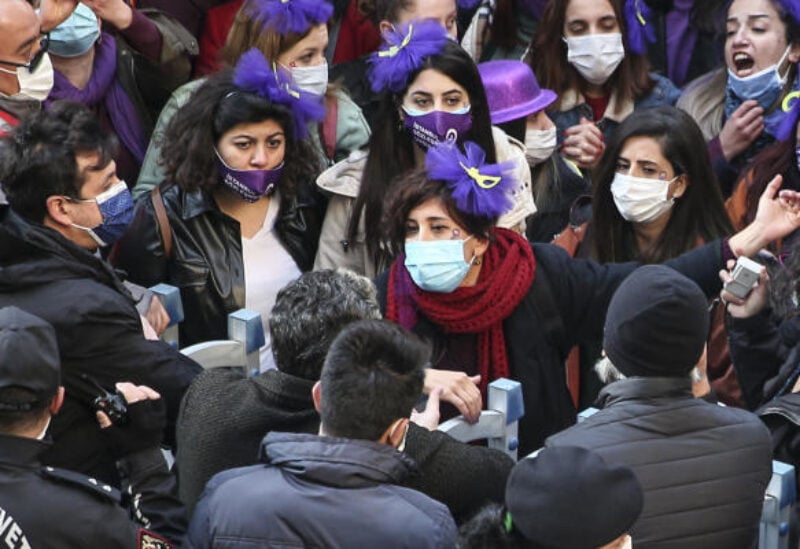 Human Rights Watch (HRW) has demanded that Turkish authorities end a criminal investigation into rights activists after they were arrested at an International Women’s Day (IWD) rally in Istanbul for “insulting” President Recep Tayyip Erdogan.
The offense is punishable with a prison sentence of between one and four years. HRW said the investigation is a violation of freedom of expression.
On March 10, police detained 13 activists, including a 17-year-old, after an operation ordered by the Istanbul prosecutor’s office.
The following day, a court imposed travel bans on 17 women and additional judicial control orders on five activists, including the child. The decision requires them to attend police stations on a regular basis until further notice.
“Opening criminal investigations against women’s rights activists for non-violent slogans, and taking them from their homes in the middle of the night, demonstrates the Turkish authorities’ profound disdain for freedom of assembly and speech, and of course, women’s rights,” said Hillary Margolis, senior women’s rights researcher at HRW.
“It speaks volumes that even on a day to celebrate women and promote equality, Turkish authorities would rather target them for peaceful demonstrations than protect their rights.”
The arrests came just a week after Turkey revealed a new human rights plan to protect freedom of speech and end police detention “out of working hours.”
But HRW said Turkish police identified the phrase “Tayyip, run, run, run, women are coming” as criminally offensive.
Police also questioned the “rhythmic jumps” of activists, and interrogated women on the circumstances of the demonstration.
Turkey’s government has promoted a hard-line model of gender roles, and has looked to undermine the work of women’s rights activists across the country.
Authorities heavily restricted access to the annual IWD assembly on March 8. Hundreds of police were deployed to oversee the event, while the area was placed under total lockdown.