Turkey, Russia, Qatar to push for political resolution in Syria 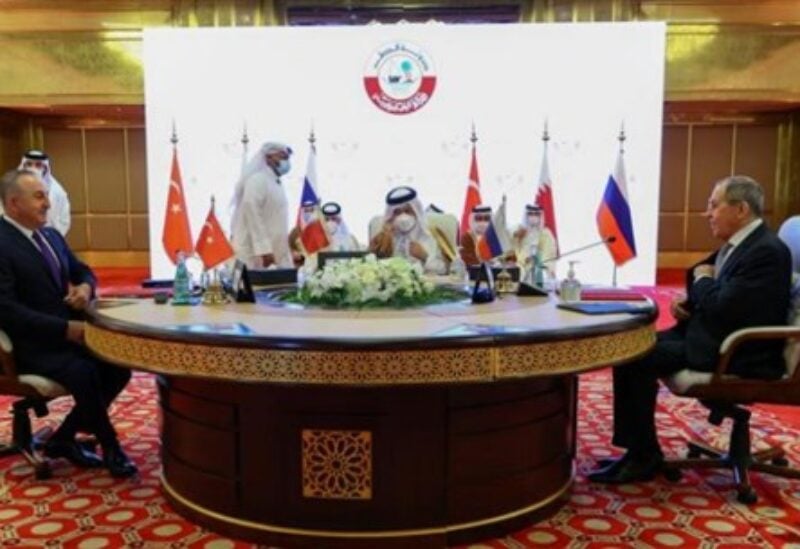 “Today we launched a new trilateral consultation process,” Cavusoglu said after talks in Doha with Russian and Qatari foreign ministers. “Our goal is to discuss how we can contribute to efforts towards a lasting political solution in Syria.”

All three ministers emphasized in their meeting that the only solution to the conflict, in which hundreds of thousands of people have been killed and millions displaced, was a political settlement in line with United Nations resolutions, he said.

Turkey and Qatar have backed fighters who sought to topple Syrian President Bashar al-Assad, while Moscow provided military support which helped Assad seize back most of the country.

Russia’s Foreign Minister Sergei Lavrov said the three countries were not seeking to replace efforts which Turkey, Russia and Iran had jointly been making since 2017 to reduce fighting in Syria and discuss a political solution.

“I can only welcome Qatar’s desire to make its contribution to creating the conditions for overcoming the current tragic situation in Syria,” he said.

Qatari minister Sheikh Mohammed bin Abdulrahman Al-Thani said they had also discussed mechanisms for delivering humanitarian aid across the whole of Syria, adding “there is a crucial need to lessen the suffering of the Syrians.”

He said the reasons for Syria’s suspension from the Arab League in 2011 remain, while Cavusoglu said recent international engagement with Assad’s government hindered efforts for a political solution by giving it more legitimacy.

In a joint statement after their talks, the ministers urged U.N. agencies and the World Health Organization to prioritize COVID-19 vaccinations inside Syria and to “enhance” efforts for delivering humanitarian aid.

They also stressed their commitment to preserving Syria’s independence and territorial integrity.

Cavusoglu said Turkey would host the next round of the talks.