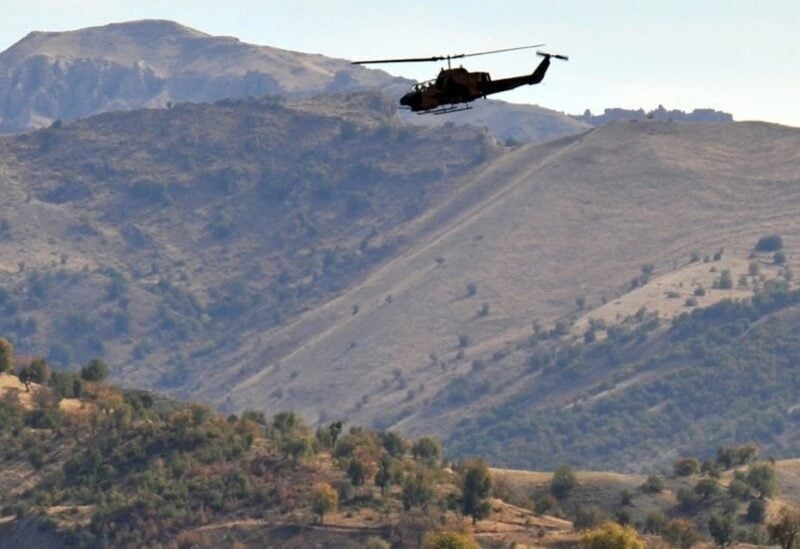 A Turkish military helicopter flies over a mountain in Yemisli, Hakkari province near the Iraqi border in southeastern Turkey, on October 22, 2011. (AFP/Mustafa Ozer)

Turkey regularly targets northwest Iraq in operations against the PKK, which Ankara considers a terrorist organization.

The Kurdish separatists have waged a decades-long insurgency against Turkey, and maintain bases in the rugged mountains across the border in Iraq.

The latest violence comes six days before a regional summit in Baghdad.

“They had gone to an area where it is advised not to go,” Mahmoud said, adding that they were not from the area, but had been visiting from the city of Mosul. “They were caught in a Turkish bombing and died.”

Turkey has installed around a dozen military bases over the past 25 years in Iraq’s autonomous Kurdish region, and it launched a new cross-border offensive in April against the PKK, consisting of both aerial and ground attacks.

Residents of dozens of villages in the area have fled the conflict.

Repeated Turkish raids have stoked tensions with Baghdad, but President Recep Tayyip Erdogan has warned that his country will “deal with” the PKK presence if Iraq is unable to do so.

On Wednesday, Iraq’s national security council condemned “unilateral military actions” and rejected “the use of Iraqi land for settling scores,” but did not specifically mention of Turkey.

Ankara is one of Baghdad’s key trading partners, and Erdogan has been invited to next week’s regional summit in Baghdad.

But it is not known if Erdogan will attend, or if Turkish operations in Iraq will be discussed.