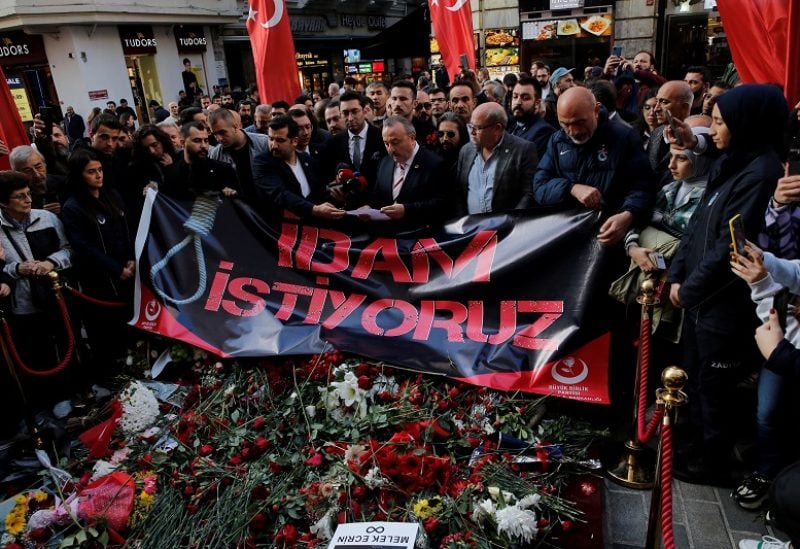 Members of Grand Unity Party (BBP) Party lay flowers and open a banner that reads "we want the death penalty" as they pay tribute to the victims of a Sunday's blast that took place on Istiklal Avenue, a popular spot for shoppers and tourists, in Istanbul, Turkey, November 15, 2022. REUTERS/Dilara Senkaya

A ban was imposed on events in Istanbul’s Istiklal Avenue, by the Turkish authorities, after a terrorist attack there that claimed the lives of six people and wounded 81 others.

The Governor of Istanbul, Ali Yerlikaya has issued an order regarding the measures to be taken to maintain security, peace, and order on the street and to accelerate the flow of pedestrian traffic.

Accordingly, it will be strictly prohibited for businesses to put tables, chairs, boards, or mobile signs on the street, open stands and exhibitions, mobile sales and sales counters, organize social, cultural, or commercial events, and perform collective or individual street music.

“Unfortunately, 81 people were injured as a result of the terrorist attack carried out on Sunday, November 13, 2022, in the Istiklal Street of our Beyoglu District, where historical, economic, social, cultural, and touristic activities are carried out most intensively,” said the order issued by Ali Yerlikaya.

“In all consultations with store operators, tradesmen, professional organizations, local administrations, and security units operating on İstiklal Avenue, which is around 1,400 meters long and has the heaviest pedestrian traffic in our country, the common demand was to ensure the flow of tram transportation and pedestrian traffic and to maintain continuity.”

Turkish police said they had arrested Syrian woman Ahlam al-Bashir for planting the bomb. Bashir and 23 other suspects were imprisoned for their involvement in the terrorist blast.

Notably, it is the first blast in Istanbul in six years.

Meanwhile, Türkiye’s counter-terrorism units at the Istanbul Security Directorate have arrested 18 suspects in a security operation against the cells of ISIS and al-Qaeda.

Turkish security sources said that Türkiye’s counter-terrorism units launched an operation to arrest individuals who have links with the conflict zones in the north of Syria and Iraq.