Turning to garbage dumps to survive, Argentines feel the pain of 100% inflation 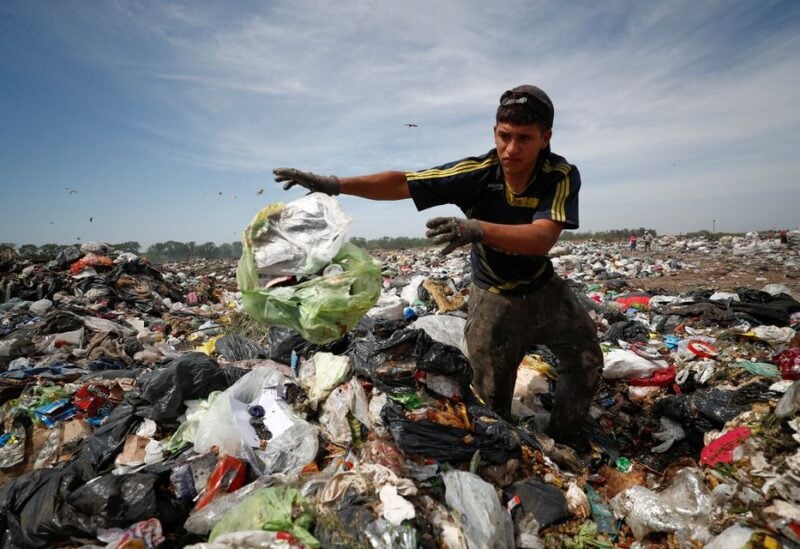 Diego, 19, looks through heaps of waste at a landfill for cardboard, plastic and metal, which he sells while working 12-hour shifts, as Argentina faces one of the world's highest inflation rates, set to top 100% this year, in Lujan, on the outskirts of Buenos Aires, Argentina October 5, 2022. REUTERS/Agustin Marcarian

Argentines struggling to survive in a country where inflation is expected to reach 100% this year are turning to garbage dump recycling or lining up to trade their belongings in barter clubs.

The South American country is on track to experience its sharpest price increase this year since a period of hyperinflation around 1990, an extreme case even in a world grappling with rising inflation caused by Russia’s invasion of Ukraine.

“My income is no longer enough,” said Sergio Omar, who spends 12 hours a day trawling through mountains of waste from a landfill in Lujan, 65 kilometers (40 miles) outside capital Buenos Aires, in search of cardboard, plastic and metal which he sells.

Omar, 41, said food costs had spiked so much in recent months that it had become hard to feed his family with five kids. He said an increasing number of informal workers would come to the waste dump to find any items they could sell in the struggle to survive.

“Twice as many people are coming here because there is so much crisis,” he said, explaining he could make between 2,000 and 6,000 pesos ($13-$40) per day selling recyclable waste.

At the dump, Reuters saw men and women searching for usable clothing and even food, wading through piles of rubbish where gas given off by the decomposing waste created sudden fires. There were many rats, wild dogs and scavenger birds.

A century ago Argentina was one of the world’s most affluent countries. But in recent years it has slid from one economic crisis to another and has struggled to keep inflation in check.

Now, prices are rising at the fastest since the 1990s – with existing problems caused by money printing and vicious cycles of price hikes by businesses now compounded by global increases in the costs of fertilizers for farming and gas imports.

Inflation likely rose 6.7% in September alone, analysts polled by Reuters said, ahead of official data expected to be released on Friday. That has led the central bank to hike the interest rate to 75%, with the possibility of more rises.

Poverty levels were over 36% in the first half of 2022 and extreme poverty rose to 8.8%, some 2.6 million people. Government welfare programs helped prevent it rising higher, but there have been calls by some for more social spending despite limited state funds.

In 2001, during one of Argentina’s worst economic crises, Sandra Contreras set up the Lujan Barter Club. That’s now taking off again as Argentines, unable to keep up with prices, look to exchange things like old clothes for a bag of flour or pasta.

“People come very desperate, their salaries are not enough, things are getting worse day by day,” Contreras said, adding that people would start queuing two hours before the barter club opened each morning.

“People have no money left, they need to take something home, so there’s no choice but to barter.”

Pablo Lopez, 26, who works in a small recycling center, said that the scars of rising prices were clear to see.

“This inflation is a madness, you can see it here with the people who come to work that inflation hits us all,” he said.