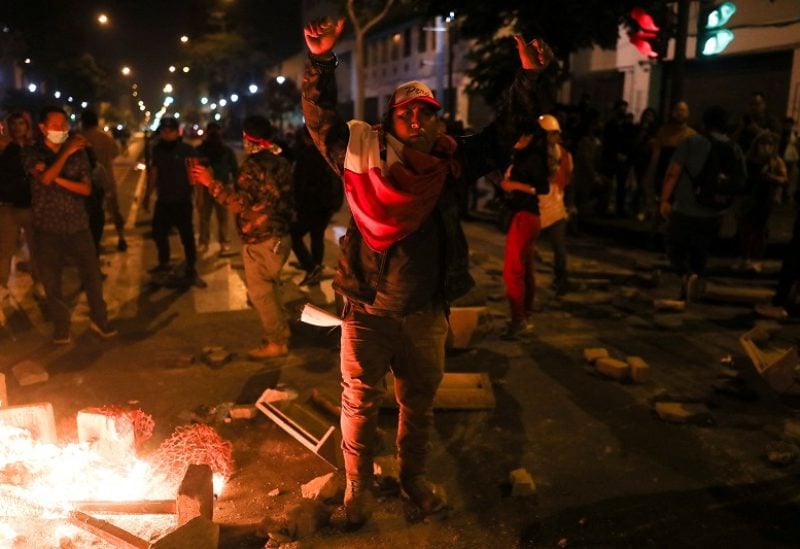 A demonstrator gestures next to a bonfire during a protest demanding the dissolution of Congress and to hold democratic elections rather than recognize Dina Boluarte as Peru's President, after the ouster of Peruvian leader Pedro Castillo, in Lima, Peru December 11, 2022. REUTERS/Sebastian Castaneda

After former President Pedro Castillo was ousted, two teens died and four others were injured on Sunday as protests calling for conducting general elections escalated in Peru, local authorities and police informed.
Last week, Dina Boluarte was sworn in as the president of Peru after Congress sacked Castillo and arrested him for making efforts to dissolve the legislature so that the impeachment vote against the latter can be prevented.
Protesters, which include supporters of Castillo, have been demanding fresh elections for days instead of allowing Boluarte to serve as the president till the term of Castillo ends in 2026.
Meanwhile, a few protesters also demanded that Congress should be shuttered.
While speaking to local radio station RPP, the Head of Peru’s ombudsman’s office Eliana Revollar said that an 18-year-old and a 15-year-old were killed during protesters’ clashes with police Andahuaylas, the city located in Apurimac’s Andean region “possibly as a result of gunshot wounds.”
Apurimac region’s governor Baltazar Lantaron said that “four injuries are reported, treated at the health centre, three of them (with wounds) to the scalp, with multiple injuries”.
The Peruvian Corporation of Airports and Commercial Aviation, which is managing the airports of the country, reported Andahuaylas airport’s closure after acts of vandalism and attacks were carried out last Saturday.
It stated that the transmitter room was set on fire by protesters which is important for providing navigation services,
On Saturday, the ombudsman’s office informed that protesters had held two police officers for hours in Andahuaylas, however, they were later released. On Saturday, the clashes with protesters injured 16 civilians and four policemen, it added.