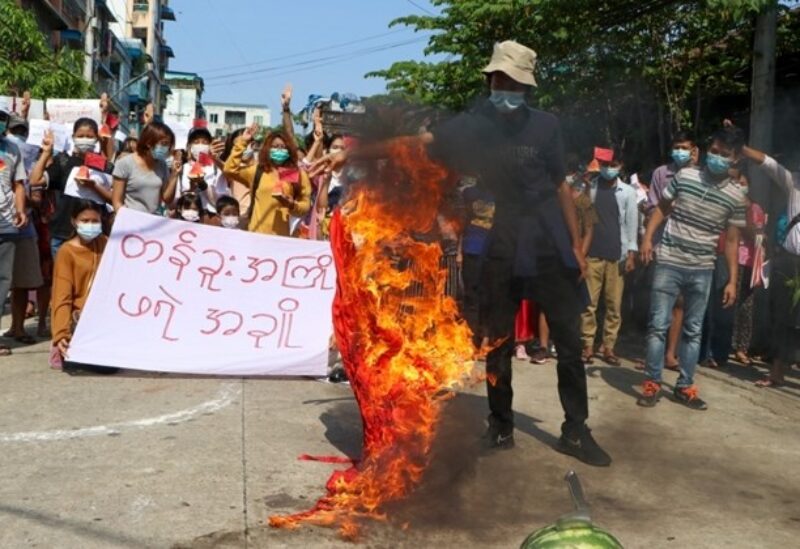 Anti-coup protesters burn a Chinese flag during a demonstration in Yangon, Myanmar

Unidentified attackers launched assaults on two Myanmar air bases on Thursday, with blasts reported at one base and rocket fire seen at another, media and a witness said.

The attacks come after three months of turmoil in Myanmar triggered by a February 1 military coup . There was no claim of responsibility or any confirmation of any casualties in the attacks. A military spokesman did not answer calls seeking comment.

In the first attack on Thursday, three blasts went off at an air base near the central town of Magway in the early hours, the Delta News Agency reported in a post on Facebook.

Later, five rockets were fired at one of the country’s main air bases, at Meiktila, to the northeast of Magway, reporter Than Win Hlaing, who was near the base at the time, said in a post.

He also posted a video clip that included the sound of what appeared to be a rocket flying overhead followed by a blast. Reuters could not verify the clip.

Since the ouster of an elected government led by Nobel laureate Aung San Suu Kyi, pro-democracy protests have rocked cities and towns, and the military has cracked down with lethal force, killing more than 750 people, according to an activist group. Reuters is unable to confirm the casualty toll.

Fighting between the military and ethnic minority insurgents has also flared since the coup with the military launching numerous air strikes in the north and east.