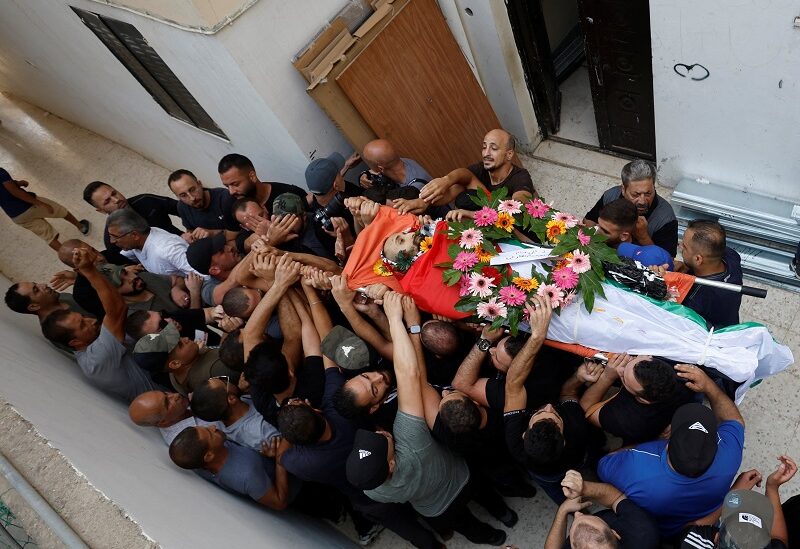 SENSITIVE MATERIAL. THIS IMAGE MAY OFFEND OR DISTURB People react as they carry the body of Palestinian Yazan Afanah, who was killed during an Israeli raid in Qalandiya, in the Israeli-occupied West Bank September 1, 2022. REUTERS/Mohamad Torokman

The Palestinian health ministry said, that two Palestinians were killed early Thursday in separate clashes with the Israeli army in the occupied West Bank.
The ministry said in a statement that Samer Khaled, 25, from Al-Ain camp in Nablus, suffered a fatal gunshot wound to the neck, and Yazan Afana, 26, from Qalandia camp outside Jerusalem, died after being shot in the heart.

Afana was killed during an operation in Al-Bireh, near Ramallah, the health ministry said.

A Palestinian official said the death of Afana was linked to fire from Palestinian militants, rather than the Israeli army.

The army said in a statement that its soldiers arrested six wanted men in operations throughout the West Bank overnight.

“During the operation (in Balata), the forces responded by firing after a shot was fired at them,” the army statement said, AFP reported.

“There are claims of a dead Palestinian,” it added.

The army said that during the operation in Al-Bireh, its forces were attacked with stones and Molotov cocktails and responded using “riot dispersal means”.

It added that in this case too it had been informed of the death of a Palestinian.

On Tuesday, four Palestinians and two Israelis were injured in separate incidents near Nablus, the scene of recurrent violence in recent months.

Israel has occupied the West Bank since 1967, when it captured the territory from Jordan.