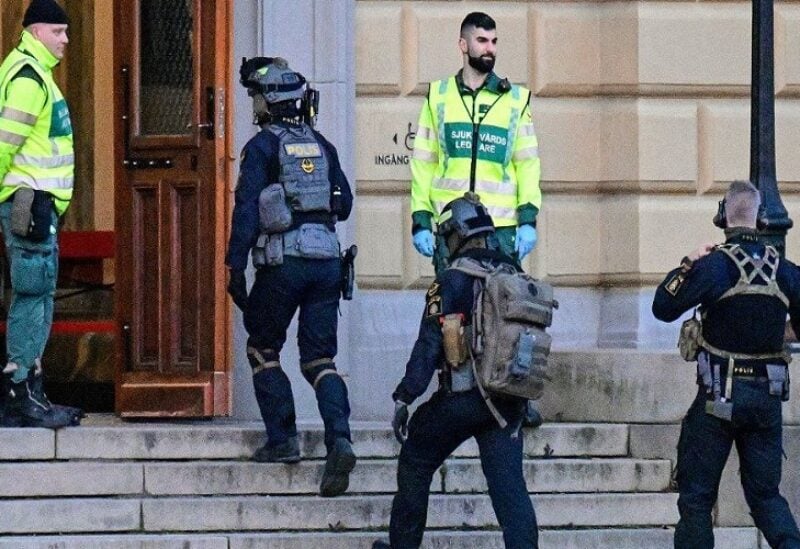 Two teachers in their 50s have died after a violent attack at a secondary school in the southern Swedish city of Malmö, police say.

An 18-year-old student at the school has been arrested on suspicion of murder.

Local media report that the victims were stabbed, but no firearms were used in the attack.

The two women, employees of Malmö Latin School, were taken to hospital by ambulance but died of their injuries.

At a news conference on Tuesday morning, police said the suspect was arrested just 10 minutes after the alarm was raised.

Officers arrived at an apparently calm school, but found the two injured women and the suspect on the third floor. Swedish news outlet Aftonbladet reports that he was found with an axe and a knife.

The 18-year-old man had no criminal record or history of suspicious behaviour, police said, but investigations were continuing. Police said they would interview the suspect and many others from the school on Tuesday.

The motive remains unknown and there is as yet no evidence of an unusual link between the student and two teachers.

Malmö chief of police Petra Stenkula told reporters that the suspect’s home was being searched and that police were interviewing other students and looking for any filmed footage that might exist.

She also said officers were investigating reports in Swedish media that the suspect called the police himself, allegedly admitting to having killed two people. Others also called the emergency services during the incident.

About 50 people, both students and teachers, were in the building when the attack took place. Police were notified at 17:12 (16:12 GMT) on Monday, and the suspect was detained by 17:22.

Police evacuated the school and searched its grounds, but found “no indication” of any more perpetrators.

Teachers and pupils told local media that police had entered the school with their weapons drawn and ordered them to remain locked in their classrooms for several hours.

The large secondary school in Sweden’s third-largest city is well-known. It was originally founded in 1406 as a church school and moved to its current location in the late 1800s.

All classes scheduled for Tuesday had been cancelled, the school’s website said. Crisis support is also being made available to students.

“This is absolutely terrible,” headteacher Fredrik Hemmensjö told the Aftonbladet newspaper, saying there had been “deadly violence” at the school.

It is the third knife attack at a school in the Skåne region in the last year, though police have not established any link between this attack and the earlier non-fatal incidents.

Officers said they were still trying to work out what was behind the incident.

“Now a great deal of work awaits to be able to understand what happened and the underlying motive for this terrible event,” said Malmö North police chief Åsa Nilsson.

Swedish Prime Minister Magdalena Andersson said she had heard the news with “sadness and dismay”.

Writing on Facebook, she said: “Now the police and prosecutors must find out what happened, so that the person behind this is held accountable for their actions.”