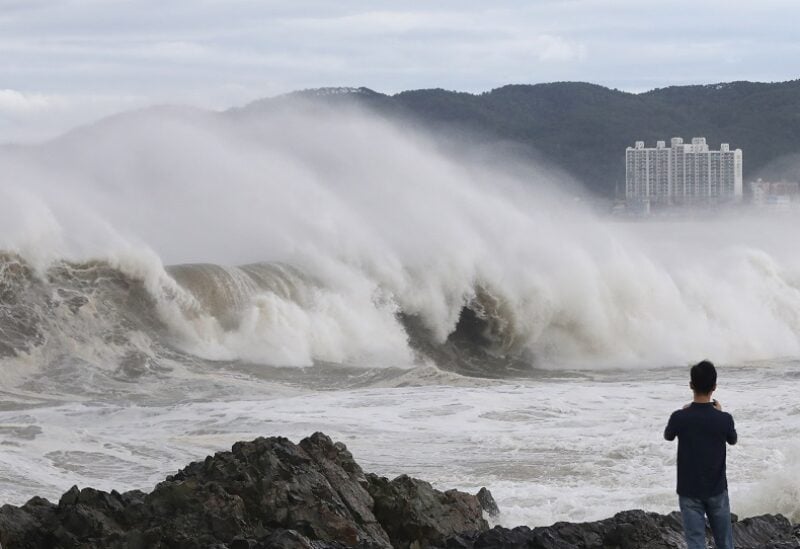 A man looks at a high wave caused by Typhoon Hinnamnor in Ulsan, South Korea, September 6, 2022. Yonhap via REUTERS ATTENTION EDITORS - THIS IMAGE HAS BEEN SUPPLIED BY A THIRD PARTY. SOUTH KOREA OUT. NO RESALES. NO ARCHIVE.

Unleashing fierce rains and winds that destroyed trees and roads, and left more than 20,000 homes without power, Typhoon Hinnamnor forced thousands of people to evacuate their homes in the southern regions of South Korea.
A 25-year-old man went missing after falling into a rain swollen stream in the southern city of Ulsan, according to the Ministry of the Interior and Safety, which didn’t immediately report more casualties. Fires were reported at a major steel plant operated by POSCO in the southern city of Pohang, but it wasn’t immediately clear whether they were caused by the storm.
Government officials have put the nation on alert about potential damages from flooding, landslides and tidal waves unleashed by Hinnamnor, which they said would be the most powerful storm to hit the country in years. The storm came just weeks after capital Seoul and nearby regions were battered by heavy rainfall that unleashed flashfloods and killed at least 14 people.
Prime Minister Han Duk-soo had called for proactive efforts to evacuate residents in areas vulnerable to flooding, saying that Hinnamnor could end up being a “historically strong typhoon that we never experienced before.”
South Korea’s weather agency said Hinnamnor–packing heavy rains and winds of up to 144 kilometers (89 miles) per hour – was moving northeast toward open sea after grazing the southern resort island of Jeju and making landfall near the mainland port of Busan earlier on Tuesday.
The storm dumped more than 94 centimeters (37 inches) of rain in the central part of Jeju since Sunday, where winds once reached a maximum speed of 155 kph (96 mph).
The Safety Ministry said more than 3,400 people in the southern regions were forced to evacuate from their homes because of safety concerns and that officials were advising or ordering 14,000 more people to evacuate. At least five homes and buildings were flooded or destroyed, and scores of roads were damaged.
More than 600 schools nationwide were closed or converted to online classes. More than 250 flights and 70 ferry services were grounded while more than 66,000 fishing boats evacuated to ports. Workers as of 6 a.m. managed to restore electricity to 2,795 of the 20,334 households that were knocked out of power.