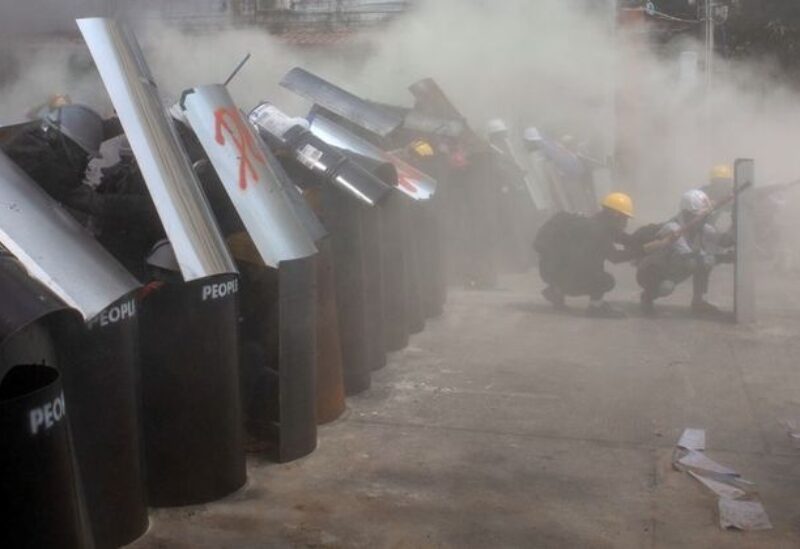 Protesters cover with makeshift shields during an anti-coup protest in Yangon, Myanmar

Myanmar security forces used tear gas and stun grenades to break up a protest in Yangon on Saturday, just hours after a United Nations special envoy called on the Security Council to take action against the ruling junta for the killings of demonstrators.

The Southeast Asian country has been plunged into unrest since the military overthrew and arrested elected leader Aung San Suu Kyi on Feb. 1, with daily protests and strikes that have choked business and crippled administration.

Sporadic protests were held across Myanmar on Saturday and local media said police fired tear gas shells and stun grenades to break up a demonstration in the Sanchaung district of Yangon, the country’s biggest city. There no reports of casualties.

The United Nations says at least 50 protesters have been killed – 38 on Wednesday alone. Protesters demand the release of Suu Kyi and the respect of November’s election, which her party won in landslide, but which the army rejected.

“How much more can we allow the Myanmar military to get away with?” Special Envoy Christine Schraner Burgener told a closed meeting of the 15-member U.N. Security Council on Friday, according to a copy of her remarks seen by Reuters.

“It is critical that this council is resolute and coherent in putting the security forces on notice and standing with the people of Myanmar firmly, in support of the clear November election results.”

The army says it has been restrained in stopping demonstrations, but has said it will not allow them to jeopardize stability.

On Saturday, in the southern town of Dawei, protesters chanted “Democracy is our cause” and “The revolution must prevail”. Protesters were also gathering in the biggest city, Yangon.

People have taken to the streets in their hundreds of thousands at times, vowing to continue action in a country that spent nearly half a century under military rule until democratic reforms in 2011 that were cut short by the coup.

“Political hope has begun to shine. We can’t lose the momentum of the revolution,” one protest leader, Ei Thinzar Maung, wrote on Facebook. “Those who dare to fight will have victory. We deserve victory.”

At least one man was killed by security forces in protests on Friday. An official from Suu Kyi’s National League for Democracy (NLD) and his teenage nephew were also stabbed to death by military supporters, local media said.