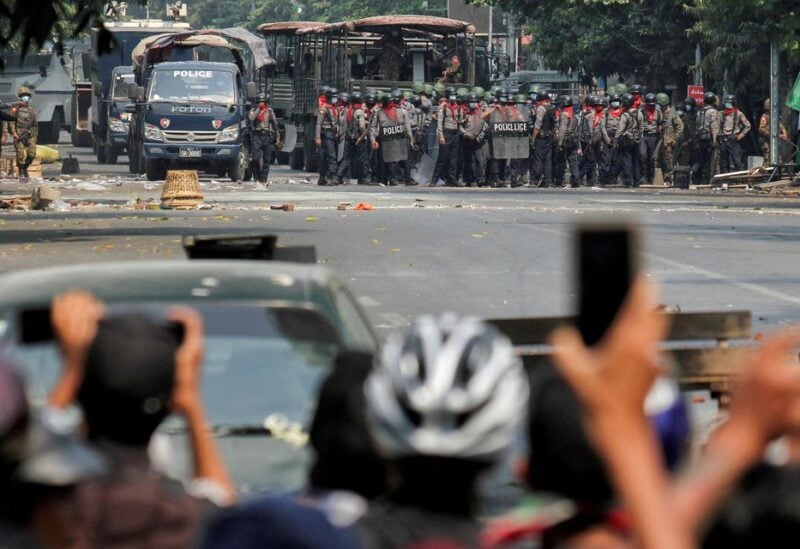 Police stand on a road during an anti-coup protest in Mandalay, Myanmar, March 3, 2021. REUTERS/Stringer/File Photo

A senior U.N. official is making a rare trip to Myanmar this week. The trip coincides with domestic political unrest and deteriorating ties between Myanmar and its Southeast Asian neighbors, according to the United Nations.

Since the military toppled an elected administration headed by Nobel laureate Aung San Suu Kyi early last year and began a brutal assault on protesters that followed, Myanmar has been in upheaval.

Noeleen Heyzer, the U.N. secretary-general’s special envoy to Myanmar, is visiting after “extensive consultations with actors from across the political spectrum, civil society as well as communities affected by the ongoing conflict”, the United Nations said in a statement dated Monday.

Referring to a U.N. Security Council call for an immediate cessation of all forms of violence and unimpeded humanitarian access, the United Nations said Heyzer would “focus on addressing the deteriorating situation and immediate concerns”.

It gave no more details of her visit.

Junta spokesperson Zaw Min Tun told a pro-army media outlet that Heyzer was due to arrive on Wednesday.

“She will meet the country’s leader and other senior ministers,” he said, adding that no request had been made to meet Suu Kyi.

The junta has not allowed an envoy from the ASEAN regional bloc to meet her.

A Myanmar court on Monday sentenced Suu Kyi to six years in prison after finding her guilty in four corruption cases.

The 77-year-old veteran leader of Myanmar’s opposition to military rule has been charged with at least 18 offences ranging from graft to election violations, carrying combined maximum jail terms of nearly 190 years.

Suu Kyi has called the accusations absurd and denies all charges against her. She is being held in solitary confinement and had already been jailed for 11 years in other cases.

Western countries and other critics of the junta say the charges against Suu Kyi are trumped-up and aimed at permanently blocking her return to politics.

Southeast Asia’s ASEAN, which includes Myanmar, said the executions made a “mockery” of its efforts to achieve peace in the country.