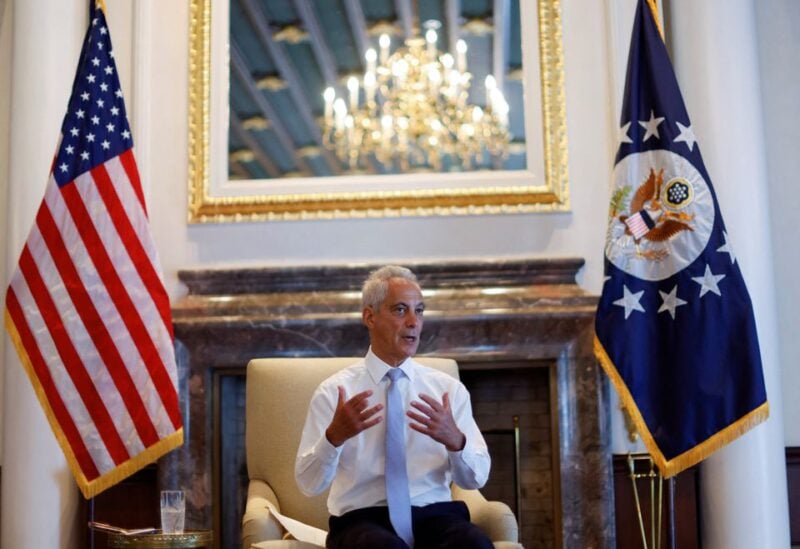 U.S. Ambassador to Japan Rahm Emanuel speaks during an interview with Reuters at the ambassador's residence in Tokyo, Japan, August 1, 2022. REUTERS/Issei Kato

Chips, batteries, and energy are critical areas of cooperation between the United States and Japan as the two countries work to protect supply chains and confront China, according to Washington’s envoy to Tokyo.

Since taking office as the United States ambassador this year, Rahm Emanuel, a former mayor of Chicago, has concentrated on “commercial diplomacy,” encouraging business partnerships in sectors with broader implications for economic security.

One U.S. company is now looking at a “major potential investment” related to chips in Japan, in what would mark the latest collaboration between the countries on semiconductors, Emanuel told Reuters in an interview.

He declined to elaborate or give a timeline.

“Commercial diplomacy is a big piece of an overarching economic collaboration and coordination between the United States and Japan,” Emanuel said on Monday.

The two countries agreed on Friday to establish a new joint research centre for next-generation semiconductors.

Japan has said it will provide as much as 92.9 billion yen ($700 million) to help U.S. firm Western Digital Corp and partner Kioxia Holdings boost memory chip output at a Japanese plant.

The cooperation comes as China has used its economic strength to pressure other countries, Emanuel said.

“There’s a pattern here: if they don’t like what you say politically, they put the muscle on you economically,” he said, citing Japan’s experience more than a decade ago when Beijing restricted rare earth export quotas after a territorial dispute.

In a joint statement on Friday, ministers from the United States and Japan said they opposed “economic coercion”, although they did not name a specific country.

However, U.S. Secretary of State Antony Blinken said during a news briefing that “the coercive and retaliatory economic practices of the People’s Republic of China force countries into choices that compromise their security, their intellectual property, their economic independence.”

China has repeatedly said it never uses economic coercion against any country and is firmly opposed to all forms of coercion, politically and diplomatically. It has accused Washington of engaging in economic coercion in the name of national security.

Emanuel said that if a country is pressured by China, the United States needs to counter with “economic incentives”, including using energy resources as a “strategic asset”.

Japan, the world’s largest LNG buyer, is a growing market for U.S. natural gas. Between 2018 and 2021 Japanese imports of U.S. LNG more than doubled, Japanese government data shows. The advanced nuclear reactors known as small modular reactors (SMRs) are another area of collaboration.

Emanuel declined to say whether U.S. House of Representatives Speaker Nancy Pelosi, who kicked off a tour of Asia on Monday, would visit Taiwan, the self-ruled island claimed by Beijing

Concerns about Chinese tensions with Taiwan, which makes the vast majority of semiconductors under 10 nanometres that are used in smartphones, have driven countries like the United States and Japan to step up investment in chip production.

Emanuel said there also needed to be more investment in training skilled workers to support the chip industry.

“We both have to invest in more scientists, more engineers and in workers to do this,” he said.