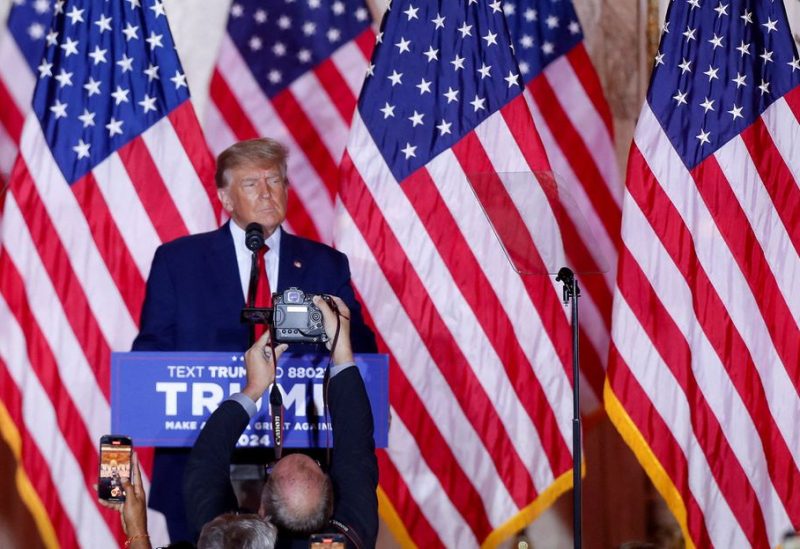 Former U.S. President Donald Trump makes an announcement of his plans to run for president in the 2024 U.S. presidential election at his Mar-a-Lago estate in Palm Beach, Florida, U.S. November 15, 2022. REUTERS/Octavio Jones/File Photo

Judges on a federal appeals court in Atlanta expressed sympathy on Tuesday for the U.S. Justice Department’s effort to overturn the choice of an impartial arbitrator to review documents taken by the FBI from Donald Trump’s Florida property as they grilled the former president’s attorney.

A three-judge panel of the 11th U.S. Circuit Court of Appeals heard arguments in the department’s challenge to a judge’s September appointment of a “special master” to review the documents and consider whether some should be walled off from an ongoing criminal investigation. The department is also seeking immediate access to all of the seized documents.

It was one of a series of legal woes that Trump faced on Tuesday, a week after launching a fresh run for the White House, including the U.S. Supreme Court clearing the way for a Democratic-led congressional committee to get access to his tax returns.

Trump lawyer James Trusty told the judges in Atlanta that Trump’s status as a former president made the documents dispute an unusual case that required a special master’s review.

But 11th Circuit Chief Judge William Pryor repeatedly questioned whether allowing a court to step into the criminal investigation now, before any indictment has been made, would create a bad precedent that would harm other investigations.

Pryor also questioned whether Trump’s lawyers had shown any evidence of unlawful activity related to the document seizures.

“If you can’t establish that, then what are we doing here?” Pryor asked.

Trusty acknowledged that the search of Trump’s property was not handled any differently than a typical criminal investigation, except for Trump being a former president.

Justice Department lawyer Sopan Joshi told the court that the department could find no other instance in which a judge exercised jurisdiction and effectively paused an ongoing criminal investigation when there was no evidence of an illegal search by the government.

FBI agents seized about 11,000 records, including about 100 marked as classified, during the Aug. 8 court-approved search at Trump’s Mar-a-Lago estate in Palm Beach as part of a criminal investigation into his possession of government documents after leaving office last year. U.S. Attorney General Merrick Garland last Friday named a special counsel, Jack Smith, to take over that investigation three days after Trump announced a 2024 presidential run.

U.S. District Judge Aileen Cannon named Raymond Dearie, who also is a federal judge, to serve as special master. At issue in Dearie’s vetting process is be whether any of the documents are protected by a legal doctrine called executive privilege that enables presidents to withhold certain forms of confidential communications, and whether any of them qualify as “personal” records that also should be kept from investigators.

In another development on Tuesday, Republican U.S. Senator Lindsey Graham testified before a special grand jury in Georgia investigating whether Trump and his allies attempted to overturn the state’s 2020 presidential election results. President Joe Biden defeated Trump in Georgia.

“Senator Graham appeared before the Fulton County Special Grand Jury for just over two hours and answered all questions,” the senator’s office said in a statement.

The Justice Department said the redactions included information from “a broad range of civilian witnesses” as well as investigative techniques that, if disclosed, could reveal how to obstruct the investigation.

Trump’s lawyers told Cannon that he must be able to review the full affidavit to determine whether the department violated the U.S. Constitution’s Fourth Amendment prohibition on unreasonable searches and seizures.

Regarding the documents, the department has said Trump has not provided evidence that the seized documents are “personal” and that as a former president he cannot invoke executive privilege to shield records belonging to the current executive branch.

Cannon, who was appointed to her judgeship by Trump, also blocked investigators from reviewing all of the seized documents until Dearie concludes his work. Federal prosecutors have argued that Cannon’s rulings are hindering the investigation.

The 11th Circuit has ruled in favor of the Justice Department once before in the investigation, deciding in September that prosecutors can have access to the documents marked as classified. Judges Britt Grant and Andrew Basher, both Trump appointees, took part in that ruling and were on the three-judge panel on Tuesday.

Dearie’s review of the papers has continued while his appointment is being litigated.