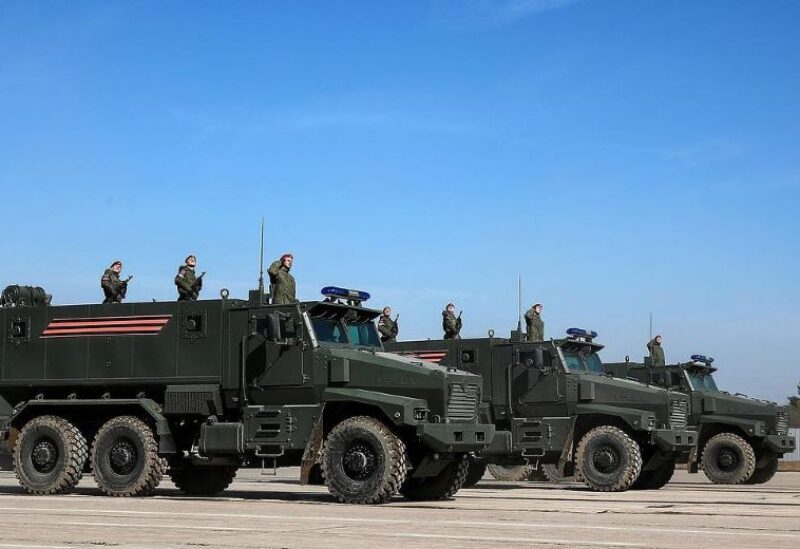 The State Department has authorized three NATO countries to send anti-armor missiles and other US-made weaponry to Ukraine, signaling a growing sense of urgency among Western allies in the face of Russia’s threat of a multi-front attack.

The petitions from Latvia, Estonia, and Lithuania were received in recent weeks, with the latest of the three being authorized on Wednesday after being received the night before, according to an administration official who spoke on the condition of anonymity to discuss an unannounced matter.

In addition, the Biden administration will begin deploying anti-armor missiles, ammunition, and other materiel worth $200 million to Ukraine in the coming days.

Under export control procedures, the three nations were obliged to get State Department clearance before delivering weapons to Ukraine. The administration official refused to specify which weapons were permitted for shipment.

The clearances come as US authorities raise the stakes in the event of a Russian invasion of Ukraine.

During a news conference on Wednesday, President Joe Biden stated that “my judgment is [Russian President Vladimir Putin] will move in” against Ukraine, but that “I think he’ll regret it.”

According to a State Department source, the landing of Russian troops in Belarus for hurriedly publicized military drills over the weekend poses a new threat to Ukraine. “Russia may seek to deploy soldiers in Belarus under the cover of cooperative military drills in order to potentially invade Ukraine from the north,” according to the official.

The nations most vulnerable to fresh Russian adventurism — the Baltic NATO members, all of which were former Soviet satellite republics — are not only rushing weaponry to Ukraine, but have also asked more NATO soldiers to supplement those already present.

If deployed in force, the dozens of Russian military brigades placed along the Ukrainian border, equipped with tanks, rocket launchers, and mobile artillery, would be nearly hard to halt. However, the Javelin anti-armor missiles that Ukraine currently has, as well as weaponry such as Stinger ground-to-air missiles that remain on its want list, might impose a cost on Russian forces, perhaps causing Putin problems at home.

POLITICO reported earlier on Wednesday that the weapons transfer requests were still making their way through Washington’s bureaucracy, despite the fact that various officials and individuals familiar with the process confirmed the transfers were being reviewed. A State Department spokesman declined to comment on the transfer’s status, and a National Security Council representative did not reply to calls for comment.

Idaho Sen. Jim Risch, the senior Republican on the Senate Foreign Relations Committee, told POLITICO that he hopes the permits are approved soon by the State Department.

“We cannot allow bureaucracy and the existing quo to prevent us from doing what is necessary to get the Ukrainians what they need to defend themselves,” he said in a statement. “Given the severity of the issue, the Biden administration should muster the political will and figure out how to advance these export permits more quickly.”

Signing off on the transfer of US equipment to a third party is a complicated process that involves evaluations and permissions from numerous US government entities. However, in some cases, third-party transfer is still faster than Washington delivery.

According to Elias Yousif, an arms transfer policy expert at the Stimson Center, the Foreign Assistance Act requires that a third-party transfer fulfill specific conditions, including whether the United States would have undertaken the same transfer if it had chosen to. “The government initiating the transfer also has to demonstrate why they’re transferring [the weapons] and all the related information that they have, including information on the beneficiaries and recipient unit,” he added, emphasizing that the procedure is time-consuming.

The United States supplied $650 million in weaponry and military equipment to Ukraine last year, the largest in a single year since security aid began in 2014.

Last month, Peeter Kuimet, the head of Estonia’s International Cooperation Department, stated that his country was contemplating providing Ukraine its Javelin anti-armor missiles and 122-mm howitzers, but needed US clearance for the Javelins and Finland and Germany’s agreement for the howitzers.

Lithuanian Defense Minister Arvydas Anuauskas committed in December to deliver deadly weapons to Ukraine, but he did not define what they may be. “It’s a multilateral arrangement since numerous nations are involved, not only the donor and recipient, but also the manufacturer and supplier,” he explained.

Both nations already have Javelins and will most likely need to start replacing them with newer versions of the missile when the present ones wear out.

The State Department authorized a request for a portion of that replenishment in December, when it approved the sale of 230 Javelins to Lithuania, after a 2015 sale of 220 of the missiles. In 2014, Estonia also ordered 350 Javelin missiles.

According to a Lithuanian official, the government is also prepared to “expand the number of instructors for our military training mission, as well as provide extra material assistance: both deadly, non-lethal, and humanitarian.”

The fiscal 2022 National Defense Authorization Act requests for $300 million in military support from the United States to Ukraine this year, with at least $75 million expressly dedicated for lethal assistance.

Because of the rapidly changing situation on the ground, some nations have begun delivering their own weaponry to Ukraine.

British Defense Secretary Ben Wallace declared on Monday that the United Kingdom will “provide Ukraine with light, anti-armour, defensive weapon systems” and deploy “a limited number of UK soldiers” to Ukraine to offer training on the weapons.

The British government has been engaged in the region, sending engineers to Poland last year to support local troops in reinforcing the country’s border with Belarus after Belarusian President Alexander Lukashenko’s administration brought thousands of refugees from the Middle East to Poland’s border.

In November, the United Kingdom signed an agreement with the Ukrainian government to build eight new warships, including mine-hunting boats for the Ukrainian navy.

According to a British government official, “the United Kingdom and our partners are giving a range of help to Ukraine, including to strengthen Ukraine’s defense capacity, but this support is mainly defensive in character.” NATO and Ukraine neither constitute a serious threat to Russia.”

Another State Department official said Wednesday that the United States had authorized the $200 million weapons package it had been discussing whether to deploy to Ukraine, which includes additional Javelin missiles, ammo, radar systems, and medical supplies, according to The Associated Press.

A bipartisan delegation of US senators visited Kyiv over the weekend, promising additional defensive and deadly weaponry. Wednesday morning, the congressmen briefed Biden on their visit.

The deployment of Russian troops into Belarus over the weekend adds a frightening new dimension to the conflict.

The deployment of 100,000 troops around Ukraine’s borders, along with the rapid deployment of forces into Belarus, is “far above what we would expect from a typical exercise,” according to the first State Department official.

“That’s how normal looks,” a State Department official explained. “This is something completely different.”