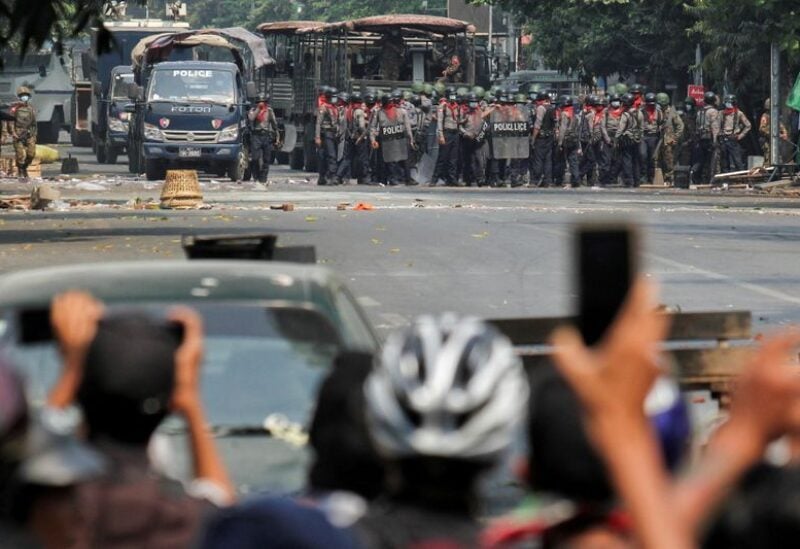 FILE PHOTO: Police stand on a road during an anti-coup protest in Mandalay, Myanmar, March 3, 2021. REUTERS/Stringer

The United States  revealed new measures on Thursday to punish Myanmar’s army for its Feb. 1 coup, blocking the ministries of defense and home affairs and top military conglomerates from specific types of trade.

The move was taken in response to the Myanmar military’s rampant crackdown on peaceful demonstrators who oppose the takeover that overthrew elected officials including leader Aung San Suu Kyi, who had won a national election in November.

Police broke up protests with tear gas and gunfire in many cities across the country. The United Nations said more than 54 people have been killed since the coup. At least 1,700 people had been detained, including 29 journalists.

Last month, U.S. President Joe Biden rolled out sanctions on Myanmar, on those responsible for the ouster of the southeast Asian nation’s civilian-led government, including the defense minister and 3 companies in the jade and gems sector.

The United States will not allow Myanmar’s military to continue to benefit from access to several items, the Commerce Department said in a statement yesterday. “The U.S. government will continue to hold perpetrators of the coup responsible for their actions.”

The Commerce Department added that it was mulling further potential action.

The 2 conglomerates identified – Myanmar Economic Corporation and Myanmar Economic Holdings Limited – are among those used by the military to control vast swathes of Myanmar’s economy through the holding firms and their subsidiaries, with interests ranging from beer and cigarettes to telecom, tires, mining and real estate.

Advocacy group Justice for Myanmar said on Tuesday that the Ministry of Home Affairs, which commands the police, had purchased technology from U.S. companies that was being used for surveillance of social media, among other uses.

Yadanar Maung, a spokeswoman for the group, lauded the measures but called for more, including similar action against the Transport and Communications Ministry, which she said was used “as window dressing for the military and security forces to acquire technology for surveillance and repression.”

“Comprehensive and targeted measures, including a global arms embargo, are essential to prevent the sale of arms and technology that will enable the military to sure up their brutal rule,” he said.

However, the measures are expected to have little impact as the U.S. ships little to Myanmar annually and the entities are not major importers.

“The volume of trade is small so the impact won’t be big,” said William Reinsch, a former Commerce Department official. “A bigger impact would be to go after the financial assets of the military leaders of the coup.”

Reinsch said the listing “will make it harder for those entities to get technology that would strengthen the military and other goods they might want.”

The United States government has yet to deploy its toughest sanctioning tool against the military conglomerates, one that would block all transactions with U.S. persons and essentially kicks the designated companies out of the U.S. banking system.