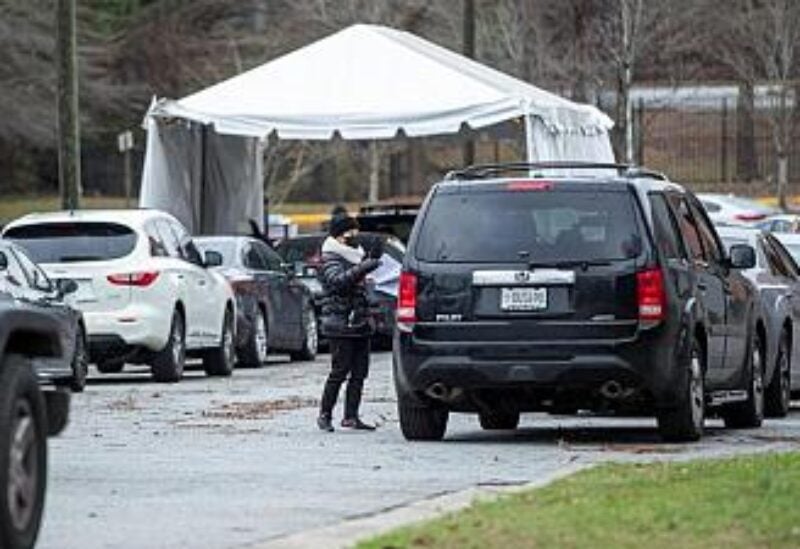 As the spread of the Omicron strain showed no signs of stopping, the United States recorded roughly 1 million new coronavirus infections on Monday, the biggest daily total of any country in the world and nearly double the previous U.S. mark established a week earlier.

According to Reuters statistics, the number of hospitalized COVID-19 patients has grown over 50% in the last week and now surpasses 100,000, marking the first time that figure has been achieved in a year.

The most recent increase, which resulted in a slew of cancellations from commercial airline flights to Broadway plays in recent weeks, was causing havoc with preparations for public schools to reopen after winter break.

Chicago Public Schools, the nation’s third-largest school district, said it would cancel classes on Wednesday after the teachers’ union voted in favor of a return to remote learning.

In Los Angeles County, the presiding judge of one of the country’s largest court systems ordered a two-week postponement of criminal trials due to the latest wave of infections.

Nationally, the United States has seen a daily average of 486,000 new cases over the past week, a rate that has doubled in seven days and far outstrips that of any other country.

The 978,856 new infections documented on Monday included some cases tallied on Saturday and Sunday, when many states do not report.

The average number of U.S. COVID-19 deaths has remained fairly steady throughout December and into early January at about 1,300 a day, according to a Reuters tally, though deaths typically lag behind case numbers and hospitalizations.

Omicron appears to be far more easily transmitted than previous iterations of the virus. The new variant was estimated to account for 95.4% of cases identified in the United States as of Jan. 1, the U.S. Centers for Disease Control and Prevention (CDC) said on Tuesday.

The World Health Organization said that evidence suggested Omicron is causing less severe illness. Nevertheless, public health officials have warned that the sheer volume of Omicron cases threatens to overwhelm hospitals, some of which are already struggling to handle COVID-19 patients, primarily among the unvaccinated.

Maryland Governor Larry Hogan declared a 30-day state of emergency on Tuesday and mobilized 1,000 National Guard members to pandemic response operations as COVID-19 hospitalizations in the state hit a record high of more than 3,000, up more than five-fold in seven weeks, Hogan said.

“The truth is that the next four to six weeks will be the most challenging time of the entire pandemic,” Hogan told reporters. He said projections show COVID hospitalizations could surpass 5,000, far higher than Maryland’s previous peak of 1,952 last year.

‘UNLIKE ANYTHING WE’VE SEEN’

In Kentucky, where Tuesday’s total of 6,915 new cases was the highest daily figure since the start of the pandemic, Governor Andy Beshear urged residents to get vaccinated and wear masks.

“Omicron is causing a surge unlike anything we’ve seen and at this rate our hospitals will fill up,” he wrote on Twitter.

The unrelenting surge has prompted more than 3,200 schools to close this week, according to the website Burbio, which tracks school disruptions. Schools that have remained open are facing staff shortages and renewed concerns about virus spread.

In Boston, where more than 54,000 students returned to class on Tuesday following the holiday, Superintendent of Schools Brenda Cassellius told reporters there were 1,000 staff members out, including 461 teachers and 52 bus drivers.

“It does make for a difficult start to the day,” she said.

Rank-and-file members of the Chicago Teachers Union voted 73% in favor of working remotely, after the union’s House of Delegates voted 88% in favor of the resolution.

Earlier, the union urged its members to stay out of the classroom and work remotely through Jan. 18, or until the city reaches minimum health-safety thresholds set last year as a condition for in-person learning, whichever comes first.

District chief executive officer Pedro Martinez said the school system would agree to further COVID-19 safety measures. But he said classes for Chicago’s 340,000 students would be canceled on Wednesday if teachers voted against reporting to work, with no remote instruction being made immediately available.

But school officials said hospitalization rates of children are low and that distance learning has hit minority and poor students particularly hard, as many depend on school-based meals and have working parents with fewer childcare options.

More than 325,000 COVID-19 cases among children were reported in the United States for the week ending Dec. 30, according to the American Academy of Pediatrics and the Children’s Hospital Association, a new high and almost double the count from the previous two weeks.