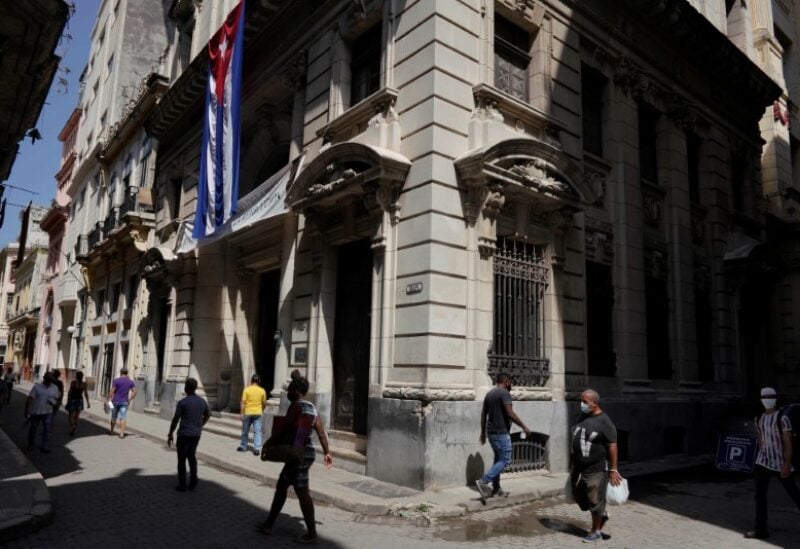 FILE PHOTO: People walk under a Cuban flag at a commercial area amid concerns about the spread of the coronavirus disease (COVID-19), in Havana, Cuba, August 3, 2021. REUTERS/Alexandre Meneghini

The US Treasury Department announced on Friday that two Cuban Ministry of Interior officials and a military unit will face sanctions as a result of the Cuban government’s crackdown on protestors last month.

The department announced that Romarico Vidal Sotomayor Garcia and Pedro Orlando Martinez Fernandez, as well as the Cuban Ministry of Revolutionary Armed Forces’ Tropas de Prevencion, will be sanctioned.

“Today’s action puts the spotlight on more culprits who are suppressing the Cuban people’s cries for freedom and human rights,” said Andrea Gacki, director of the Treasury Department’s Office of Foreign Assets Control.

The Cuban Embassy in Washington did not respond to a request to comment.

In July, the Biden administration imposed sanctions on the Cuban police force and two of its leaders.

The protests erupted in July amid Cuba’s worst economic crisis since the fall of its old ally, the Soviet Union, and a record surge in coronavirus infections. Thousands took to the streets, angry over shortages of basic goods, curbs on civil liberties, and the authorities’ handling of the pandemic.

Cuban President Miguel Diaz-Canel has blamed the turmoil on the US, which has strengthened its decades-old trade embargo against the island in recent years. Many demonstrators, he claims, were sincere but were deceived by social media efforts sponsored by the US.

The US Treasury had already announced penalties against Cuba’s defense minister and a special forces unit of the interior ministry for allegations of human rights violations during the crackdown that followed the protests, which resulted in the detention of hundreds of people.