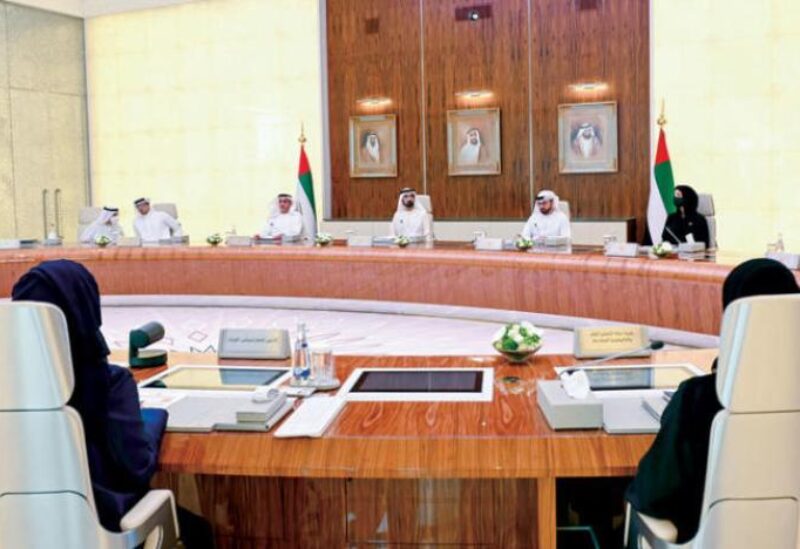 He announced that the UAE’s non-oil exports grew by 47%, the foreign direct investment flow increased by 16%, and the number of new registered companies increased by 126% compared to the pre-pandemic period.

“Our economy is growing,” he affirmed.

He added that he witnessed the signing of performance agreements for a number of ministers.

The agreements stipulate the completion of 36 transformational short cycles projects within six months to a maximum of 12 months.

They aim at enabling ministries to respond to all changes quickly and with greater flexibility.

The meeting reviewed the outcomes of the COVID-19 recovery plan (2020-2021), which included the development and implementation of 33 initiatives in partnership with federal and local entities.

The initiatives had a 100% success rate in empowering the economy, developing sectors and opening new markets.

The outcomes of the report showed that the real gross domestic product (GDP) was 3.8% in 2021, exceeding the estimates of international institutions by 1.7%, whereas the non-oil GDP reached 5.3% in the same year.

Separately, the cabinet approved housing loans for citizens worth AED2.4 billion ($653 million) for the next six months with 500 beneficiaries.

It also approved the rules of the sabbatical leave for citizens working in the government who wish to run their own business.

The leave is for a full year with half a salary while preserving the job.

The government aims to encourage the youth to take advantage of the huge economic opportunities offered by the UAE’s national economy.

In addition, the cabinet approved the UAE framework for culture and creative industries statistics, which will serve as a national database.

The framework enhances the position of the UAE in the competitiveness reports and provides comprehensive and accurate data at the federal level, enabling the monitoring of the cultural and creative industries sector.

It will also provide accurate data for talents, entrepreneurs, investors, and academic institutions in the sector.

Data shows that cultural and creative industries contributed 3.5% to the GDP amounting AED54.4 billion ($14.8 billion) and five percent of the non-oil GDP.

The number of establishments operating in the sector jumped to 36,000.