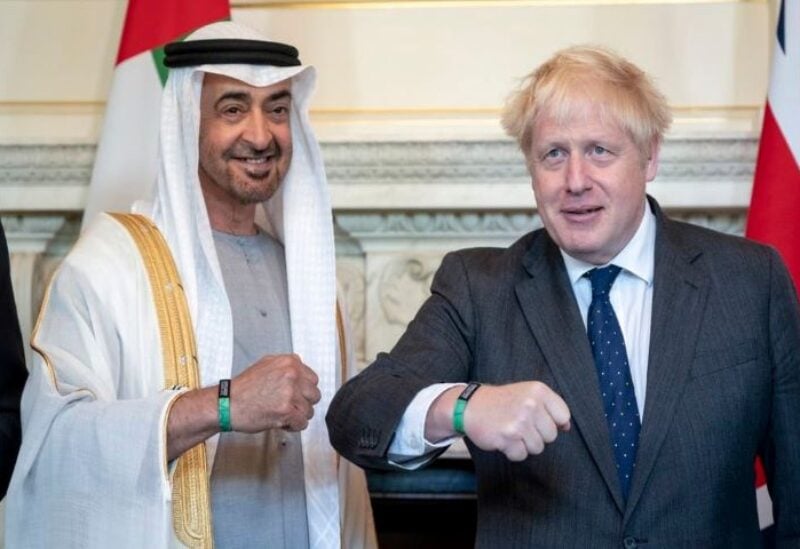 Sheikh Mohamed bin Zayed al-Nahyan, Crown Prince of Abu Dhabi, has made a historical visit to the British capital as the UK and UAE announce a new era in ties between the two countries.

UK Prime Minister Boris Johnson hosted Sheikh Mohamed at 10 Downing Street in London on Thursday for a far-reaching conversation and a launch of a ‘Partnership for the Future’ between the two nations.

A joint statement from the UAE and UK was later released on state news agency WAM.

“The leaders agreed to establish a new, ambitious Partnership for the Future that will strengthen the historic relations that the two countries share,” the statement read. “The new partnership will build on this history, and ensure that the UAE and UK are able to work closely together to promote prosperity and security, tackle climate change, and expand the exchange of knowledge, skills and ideas.”

The meeting was attended by UAE and UK ministerial representatives, ambassadors and officials from both countries.

The UK prime minister congratulated the UAE on the 50th anniversary of its founding in 1971,” a joint communique from the meeting declared

Both leaders welcomed the progress that bilateral relations have made during the past 50 years and underlined their high ambition for the future of the relationship.

The statement continued: “The UAE and the UK are committed to tackling global issues together. In recognition of the opportunity created by the depth of the strategic relationship between the two nations, both leaders agreed to establish a Partnership for the Future expanding the breadth and depth of the bilateral relationship.”

This Partnership, it said, will consist of two central pillars: the creation of sustainable prosperity and addressing global issues.

The UAE Minister of Foreign Affairs and International Cooperation and the Secretary of State for Foreign, Commonwealth and Development Affairs will co-chair an annual Strategic dialog to review the global issues pillar and to working closely together during the UAE’s term at the UN Security Council for the period of 2022-23, it continued.

The UAE and the UK will also share an important trade and investment relationship, with total trade of ₤18.6bn in 2019, and two-way investment of ₤13.4bn in 2019, promoting innovation, jobs and economic development. The leaders discussed the opportunities for economic cooperation presented by new and developing sectors including technology, education, healthcare and life sciences, and clean and renewable energy.

The leaders welcomed the recent steps to increase investment flows between both countries. Abu Dhabi’s Mubadala Investment Company and the UK’s Office for Investment signed the Sovereign Investment Partnership (SIP).

This long-term strategic agreement will serve to drive the investment relationship between the two countries, the statement said.

Over a five-year period, the Sovereign Investment Partnership (SIP) will invest across four key innovation-led sectors — technology, infrastructure, healthcare, and life sciences, and clean and renewable energy — that will support job creation in both countries, strengthen national research and development capabilities and originate new areas of investment collaboration.

UK Prime Minister Boris Johnson hosted Sheikh Mohamed at 10 Downing Street in London on Thursday for a far-reaching conversation and a launch of a ‘Partnership for the Future’ between the two nations. (Supplied: Wam)

The leaders welcomed the March announcement that saw Mubadala commit ₤800m to United Kingdom life sciences, alongside the United Kingdom Government’s ₤200m Life Sciences Investment program. the leaders announced the UAE’s investment commitment to the UAE-UK SIP – ₤10bn over the next five years in: energy transition, technology and infrastructure. The leaders welcomed also the ongoing assistance from the British Business Bank. Moreover, they discussed a number of ongoing projects under the SIP framework, with plans to announce further investments in due course.

In the energy sector, the leaders agreed to step up ties in the energy transition and decarbonization, with a particular focus on renewables and new forms of energy through three new agreements: [1] a trilateral collaboration between Abu Dhabi National Oil Company (ADNOC), Masdar and BP; [2] an agreement between ADNOC and BP on co-development of Carbon Capture, Usage and Storage; and [3] a forward-looking partnership between Masdar and BP to develop, build and operate energy and mobility services in urban spaces.

The leaders welcomed the conclusion of the United Kingdom – Gulf Cooperation Council Joint Trade and Investment Review in June 2021 and recent progress to boost bilateral trade through removing trade barriers and facilitating economic cooperation. They agreed on the importance of continued work in sectors such as education, healthcare, and food and drink, and through the United Arab Emirates- United Kingdom Joint Economic Committee, the next meeting of which was agreed to be held during Expo 2020 in Dubai.

The leaders announced the signing of the Memorandum of Cooperation (MoC) on Industrial and Advanced Technologies Co-operation between the Department for Business, Energy and Industrial Strategy and the Ministry of Industry and Advanced Technology. The MoC highlights nine priority areas for collaboration between the two countries, including Life Sciences, Hydrogen, Space, emerging renewable energy technologies, and smart and green sustainable manufacturing that will be implemented through joint engagements between government, businesses, and academic entities.

The leaders also announced the signing of a Memorandum of Understanding (MoU) on Artificial Intelligence (AI) to facilitate the transfer of knowledge, investment, and standards to bring mutual benefit to both countries.

Both countries will form a space sector joint committee to drive bilateral discussions, to deliver economic prosperity for both nations.

Both countries have developed stronger industrial ties through collaboration in defense and security. This includes blossoming relationships, including Tawazun Economic Council and EDGE Group. The leaders agreed on working together to support these emerging and future partnerships in order to promote prosperity whilst strengthening business opportunities for both.

The UAE and the UK share an important strategic defense relationship. They agreed to strengthen this, particularly on capability development and defense industrial collaboration.

The leaders underscored the importance of mutual and sustainable investment through the Sovereign Investment Partnership (SIP) into our green industries to support decarburization; through development partnerships to support climate resilience and adaptation in third countries; and cooperation on energy in the Joint Industrial Collaboration Framework.

The leaders welcomed the signing of a MOU on Climate Change and Environmental Cooperation which will strengthen collaboration on climate action, nature-based solutions and implementing the Paris Agreement. The partnership will focus on sharing best practice for climate neutrality, mainstreaming climate and environment within development co-operation, reducing climate risks, accelerating the low carbon transition nationally and globally, including through promoting the mandate of IRENA, mobilizing access to climate finance and promoting the Agriculture Innovation Mission for Climate (AIM for Climate), which will be formally launched at COP26.

The two countries reiterated their commitment to deepening their strategic partnership on foreign policy, regional, security and defense issues and they announced the launch of the strategic dialog that will drive forward collaboration in education, culture and climate change, multilateral co-operation and security issues.

The Prime Minister congratulated the UAE on its election as a non-permanent member of the UN Security Council for 2022-23, and underscored the UAE and the UK’s commitment to working together on the Security Council to promote international peace and security and address the security threats that the world faces. Moreover, the Leaders discussed the long-term strategic implications of the global recovery from COVID 19.

On regional issues, the two countries agreed to continue their close cooperation, including on security, development and humanitarian affairs. They emphasized the significance of the Abraham Accords in contributing to the enhancement of regional peace and security and reaffirmed their commitment to a negotiated two-state solution to the Israeli-Palestinian conflict, based on relevant UN resolutions.

The leaders expressed their concerns regarding developments in Afghanistan, and affirmed their commitment to preserving regional stability and preventing the resurgence of terrorism. They also emphasized the need for the protection of the rights of Afghan women and girls and emphasized the importance that their rights are preserved. The Leaders committed to work together to prevent a humanitarian disaster in Afghanistan and to support refugees.

Both leaders agreed on increased cooperation to ensure the safety and security of maritime commerce, trade and energy routes.

The leaders acknowledged the difficult circumstances caused by the pandemic globally, and they offered their deepest condolences for the loss of lives and expressed deepest sympathy with the families of the victims.

Global cooperation and solidarity is key

The leaders emphasized that global cooperation and solidarity are key to fighting the pandemic and achieving sustainable and inclusive recovery. Moreover, they welcomed the increase in the level of vaccinations in the UAE and UK, and underlined their commitment to share data and exchange experience, including on genome sequencing.

They agreed on the importance of supporting efforts to increase global vaccine supply, and the recognition of vaccines adopted in both countries to strengthen cultural, trade and investment ties.

The leaders acknowledged the health impacts of climate change and pledged to use COP26 as a platform to demonstrate ambition to tackle them. They noted the importance of a strengthened WHO and its leading and coordinating role in the global health system.

The leaders agreed to expand development and humanitarian cooperation through the establishment of a Framework for Development Cooperation in areas such as climate change, education, women’s empowerment, and development in the Horn of Africa.

The UAE and the UK will build on their partnership on ensuring 12 years of quality education for all girls. The leaders affirmed the importance of using both diplomatic and development levers to support the implementation of the landmark joint UN Human Rights Council resolution on girls’ education. The UK looks forward to the ReWired Summit at Dubai Expo 2020 as another key milestone on the girls’ education agenda.

The UAE and the UK have agreed an ambitious plan for cooperation in regions of mutual interest, including the Horn of Africa. to promote shared security and stability priorities, and meeting the Sustainable Development Goals.. The leaders also underlined the importance of respect for human rights in all initiatives.

The leaders agreed to increase co-operation on areas such as cultural heritage protection, development of creative and cultural industries and exchange of best practice and expertise. Moreover, the leaders announced the signing of an MoU on the Cultural Sector, and work together to facilitate the implementation of international agreements such as those signed with UNESCO.

‘Education for the Future’

The leaders shared their ambition to strengthen education ties and committed to identify further opportunities to collaborate in technical and vocational training. They also announced the “Education for the Future initiative”, a series of thought leadership seminars that will be conducted in 2021. In addition, they welcomed the convening of the first event between the two countries on the value of IT/AI skills and competences in girls’ education.

The Prime Minister expressed anticipation of the active participation of the UK in Expo 2020 in Dubai, which will positively contribute to the spirit of global dialog, innovation, peace and prosperity.

Both countries have launched a Partnership to Tackle Illicit Financial Flows. They also agreed that international partners should work together to tackle dirty money.

The first UAE-UK Partnership meeting to tackle illicit financial flows will be held in London on 17 September 2021. The co-chairs will discuss the development of a joint action plan to mitigate and address shared illicit finance risks, threats, and vulnerabilities. The meeting will also include the signing of the Framework for the Partnership to Tackle Illicit Financial Flows.