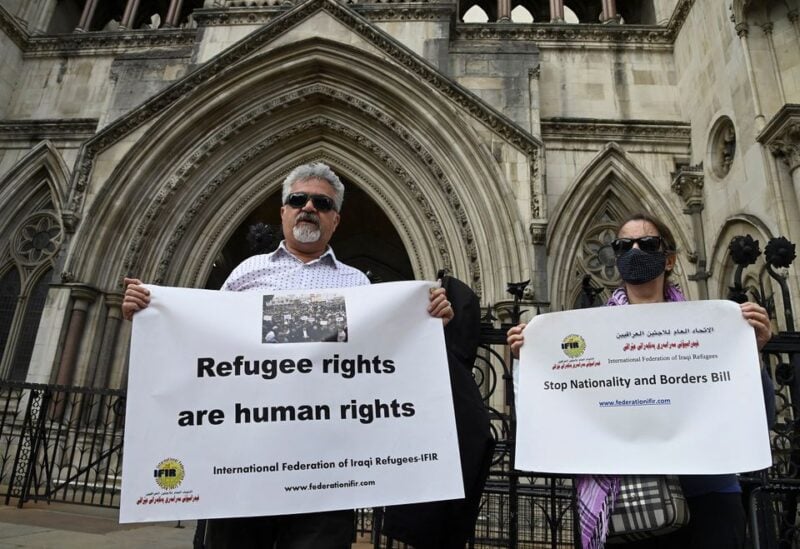 Demonstrators protest outside the Royal Courts of Justice whilst a legal case is heard over halting a planned deportation of asylum seekers from Britain to Rwanda, London, Britain, June 10, 2022. REUTERS/Toby Melville

After a judge rebuffed activists’ attempts to get an injunction to stop it, the High Court in London ruled on Friday that the first flight to send migrants entering illegally in Britain to Rwanda can take place next week.

The government’s proposal to deport asylum seekers to the East African nation had been challenged by charities and a trade union as hazardous, but the court determined the first planned trip could take place next Tuesday.

The first few dozen asylum seekers are due to be deported to Rwanda on June 14.

“There is a material public interest in the Home Secretary (Priti Patel) being able to implement immigration decisions,” Judge Jonathan Swift said.

He said some of the risks facing the deported asylum seekers outlined by the charities were small and “in the realms of speculation”.

However, the court granted human rights groups permission to appeal the decision to the Court of Appeal.

“We will continue preparations for the first flight to Rwanda, alongside the range of other measures intended to reduce small boat crossings,” she said.

The government’s plan has led to an outcry from human rights groups, opposition lawmakers as well as some in Prime Minister Boris Johnson’s Conservative Party.

Hussain said the government had made “misleading and inaccurate” claims that the United Nations High Commissioner for Refugees had given it the green light, and that it was acting on false assurances about Rwanda’s ability to offer protection to asylum seekers and process their claims.

Government lawyer Mathew Gullick said the criticisms and concerns were backward-looking, and did not reflect how the migrants would be treated. There was an “important public interest” in deterring illegal immigration, he said.

However, during the course of the hearing, the court heard that a handful of the roughly 30 people due to be deported on Tuesday would not be removed. Clare Moseley, the founder of Care4Calais, said in total about 130 migrants, many from Sudan, Syria, Iraq and Iran, faced deportation.

Last year, more than 28,000 migrants and refugees made the crossing from mainland Europe to Britain. In November, 27 people drowned in the Channel when their small rubber dinghy deflated, and many others have needed to be rescued from the narrow seaway, one of the world’s busiest shipping lanes.

Under the government scheme, anyone who arrived in Britain illegally since Jan. 1 could be relocated to Rwanda.

The government hopes the plan will deter the Channel crossings, although more than 3,500 people have reached Britain in small boats since the middle of April, when the Rwanda scheme was unveiled, according to government figures.

Johnson’s government has previously warned that “lefty lawyers” would try to block the scheme, which is popular with many in his Conservative Party, while immigration, key to the support for Brexit, remains an important issue among some Britons.

Swift said a full judicial hearing to decide on the scheme’s legality would take place before the end of July.

Israel previously attempted a similar scheme to send asylum seekers to Rwanda. But in 2018 the Israeli Supreme Court blocked the policy, saying it was not compatible with the United Nations’ refugee convention.