UK deportations to Rwanda stalled as European Court steps in 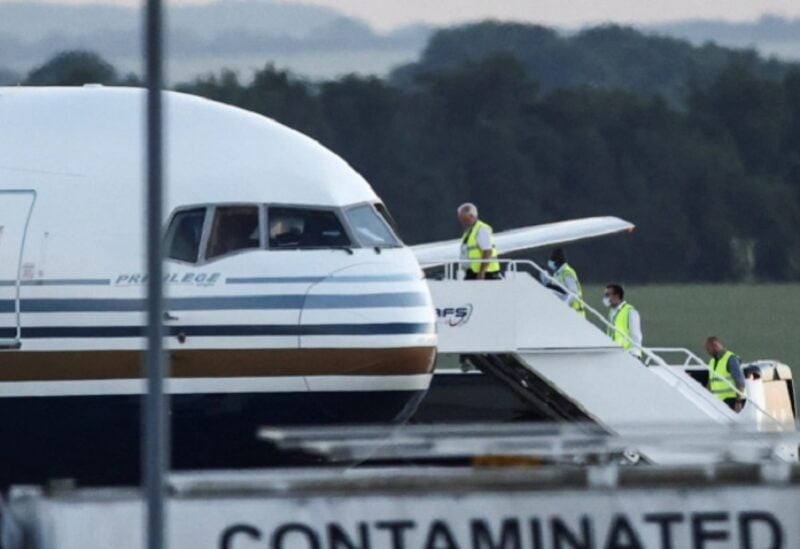 Members of staff board a plane reported by British media to be first to transport asylum seekers to Rwanda, at Boscombe Down air base in Wiltshire, UK, on June 14, 2022

The United Kingdom’s first flight to take asylum seekers to Rwanda has not taken off as scheduled after the European human rights court issued last-minute injunctions to stop the deportation of the handful of people on board.

The UK government’s plan to send asylum seekers to Rwanda on Tuesday had been heavily criticised by opponents, charities, and religious leaders who said the deportations were inhumane, and the government was forced to fight a series of legal challenges in London courts aimed at stopping the flight departing.

A handful of asylum seekers were scheduled to fly from an air force base in southwest England, but shortly before the plane was due to leave on Tuesday the European Court of Human Rights (ECHR) granted injunctions to prevent their deportations.

“I have always said this policy will not be easy to deliver and am disappointed that legal challenge and last-minute claims have meant today’s flight was unable to depart,” UK Home Secretary Priti Patel said.

“It is very surprising that the European Court of Human Rights has intervened despite repeated earlier success in our domestic courts,” Patel said.

The Home Secretary said the government would not be deterred in its deportation plans and would prepare for the next flight.

In the last few days, at least 30 individuals earmarked to be on the first flight successfully argued that they should not be deported to Rwanda on health or human rights grounds.

The ECHR’s ruling relating to one of the men due for deportation, an Iraqi, stated he “should not be removed until the expiry of a period of three weeks following the delivery of the final domestic decision in the ongoing judicial review proceedings”.

The High Court in London is due to hold this judicial review in July to decide on the legality of the scheme.

“Last ticket cancelled. NO ONE IS GOING TO RWANDA,” the charity Care4Calais, which had launched legal action on behalf of a number of the refugees, said on Twitter.

The government says the 120-million-pound ($144m) deal struck with Rwanda to accept asylum seekers from the UK will undermine the business model of people-smuggling networks.

Judges in the UK on Monday rejected an appeal against the deportations. Those due to be deported include Albanians, Iraqis, Iranians and a Syrian, Care4Calais said.

UN refugee chief Filippo Grandi had earlier denounced the UK government policy as “all wrong” and said it should not be “exporting its responsibility to another country”.

Church of England leaders, including the Archbishop of Canterbury Justin Welby, had also criticised the deportation plan as “one that should shame us as a nation”.

“Our Christian heritage should inspire us to treat asylum seekers with compassion, fairness and justice, as we have for centuries,” Welby and 24 other bishops wrote in Tuesday’s Times newspaper.

The UK government insists the policy is needed to stop a flood of all-too-often deadly crossings of the Channel from France by refugees and migrants.

“It’s very important that the criminal gangs who are putting people’s lives at risk in the Channel understand that their business model is going to be broken,” Prime Minister Boris Johnson told LBC radio on Monday.

“They’re selling people falsely, luring them into something that is extremely risky and criminal.”

Under the agreement with Kigali, anyone landing in the UK illegally is liable to be given a one-way ticket for processing and resettlement in Rwanda.

The UK government says that genuine asylum claimants should be content to stay in France.

Contradicting the UN refugee agency, the UK government insists that Rwanda is a safe destination with the capacity to absorb possibly tens of thousands of UK-bound claimants in the future.

Doris Uwicyeza, chief technical adviser to Rwanda’s justice ministry, pushed back against criticism of the human rights record of President Paul Kagame’s government – which is set this month to host a Commonwealth summit attended by Prince Charles and Boris Johnson.

Rwanda’s 1994 genocide made it particularly attentive to “protecting anybody from hate speech and discrimination”, including gay people, she told LBC radio.