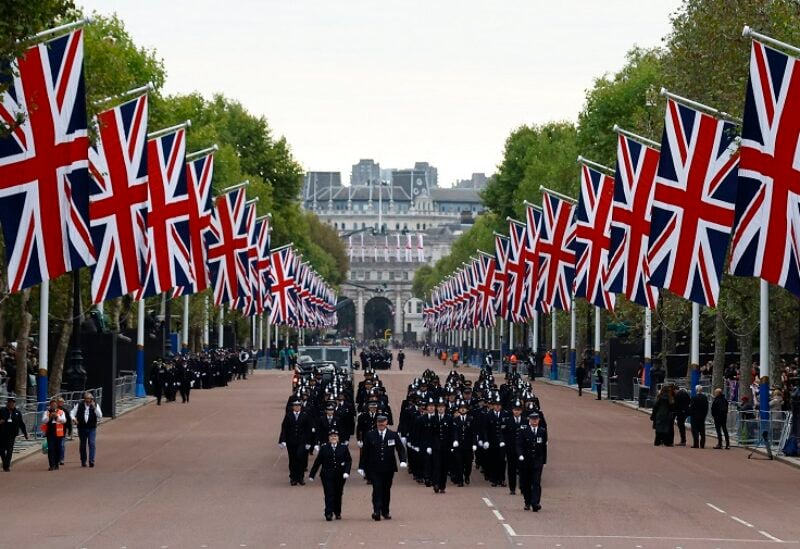 Police officers are seen on The Mall, on the day of the state funeral and burial of Britain's Queen Elizabeth, in London, Britain, September 19, 2022 REUTERS/Andrew Boyers

10 days after her death in Balmoral estate in Scotland, the British capital London is set for the biggest funeral ceremony globally in decades as Queen Elizabeth II is being laid to rest on Monday.

The late queen’s lie-in-state ended in the early hours of the funeral day and her coffin is ready for the funeral at the Westminster Abbey, where a special service will be held.

A short procession will bring the coffin from the Westminster Hall in the Palace of Westminster to the Westminster Abbey where the service will be held after the arrival of King Charles III and Queen Consort Camilla.

The procession from the Houses of Parliament to Westminster Abbey will begin at 10.35 a.m. BST (0935GMT) and the coffin will be placed on a gun carriage pulled by 98 soldiers from the British Navy.

The funeral service, led by the Dean of Westminster David Hoyle, will begin at 11 a.m. BST (1000GMT).

The service will see the attendance of other royal family members, as well as around 100 heads of state, including US President Joe Biden, and more than 20 royals and many representatives from 200 countries.

A two-minute silence will be observed in the abbey and throughout the UK at the end of the sermon by the Archbishop of Canterbury Justin Welby.

Following the service, a huge procession will take the coffin from the abbey to the Wellington Arch at Hyde Park Corner via Parliament Square, White Hall, Horse Guard Road, The Mall, and Green Park.

The state funeral is expected to attract hundreds of thousands of people to central London and it will be broadcast live on television and on big screens installed in Hyde Park.

There will be unprecedented security measures in and around the parliament building, Westminster Abbey, the procession routes, and across other roads leading to central London.

The queen’s coffin will be driven to Windsor before a new procession which will start at 3 p.m. BST (1400GMT).

The procession will end at the Windsor Castle and the royal family will follow the coffin from the castle to St. George’s Chapel. A service in the chapel will host 800 guests.

At 7.30 p.m. (1830GMT), Queen Elizabeth II will be laid to rest next to her late husband Duke of Edinburgh Prince Phillip with a private service that is to be attended by the king and other members of the family in the King George VI Memorial Chapel.

The queen, the longest serving monarch of the UK, died on Thursday, Sept. 8, at the age of 96.