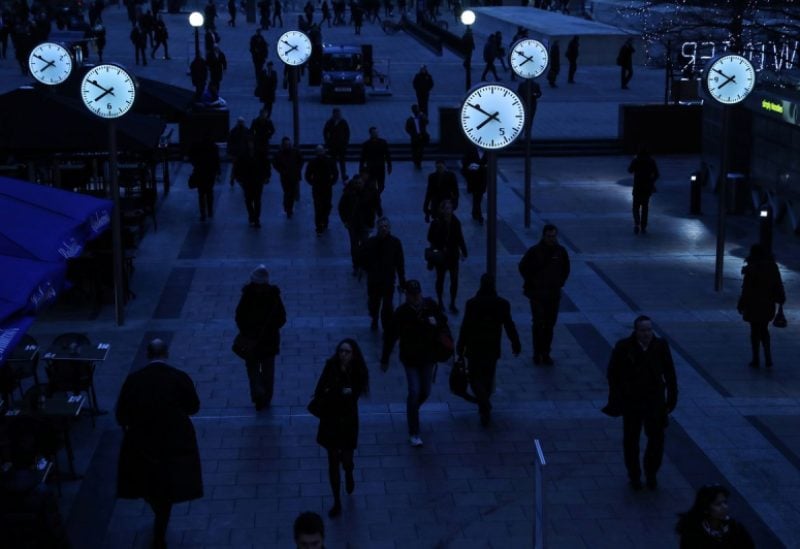 Workers walk to work during the morning rush hour in the financial district of Canary Wharf in London, Britain, January 26, 2017. REUTERS/Eddie Keogh/File Photo

Britain’s jobless rate rose for a second consecutive month, and other indicators in the statistics released on Tuesday suggested that some of the inflationary heat in the labor market is ebbing as the economy struggles, including a rise in the number of elderly individuals seeking for work.

However, the Bank of England (BoE), which is expected to hike interest rates for the ninth meeting in a row on Thursday, was probably going to highlight the greatest increase in basic pay ever, excepting the time around the COVID-19 pandemic.

Sterling briefly rose against the U.S. dollar and the euro after the figures were published by the Office for National Statistics (ONS), before falling back.

But regular pay rose by a stronger-than-expected 6.1% in the August-to-October period, the biggest gain since records began in 2001, excluding jumps during the COVID-19 pandemic which were distorted by lockdowns and government support measures.

Total pay including bonuses also increased by an annual 6.1%, the ONS said.

Martin Beck, an economist with forecasters EY Item Club, said 6.2% growth in service sector wages would catch the BoE’s attention but it would probably still slow the pace of its rate hikes to 50 basis points (bps) from November’s 75 bps increase.

The central bank is weighing up signs that Britain’s economy has already gone into a probably long recession with continued inflation problems coming from the labour market.

“The prospect of high services sector pay growth contributing to sticky inflation is more likely to make it harder for the Monetary Policy Committee (MPC) to cut interest rates next year,” Beck said.

Both measures of pay continued to lag behind inflation – which topped 11% in October – representing a further cut to spending power for households.

Samuel Tombs, an economist with Pantheon Macroeconomics, said he expected pay growth to slow as the weakening economy takes its toll on the jobs markets.

“As a result, we continue to think that enough hard evidence of rising unemployment and slowing wage growth will accumulate by the MPC’s meeting in mid-March for it to stop hiking Bank Rate, having already increased it to about 4%,” he said.

The BoE was likely to take some comfort from other parts of Tuesday’s labour market report.

It fears that the recent shrinking of the pool of workers in the labour market will add to inflation pressure in the economy.

The ONS said the economic inactivity rate – or the share of people not in work and not looking for it – fell in the three months to October to 21.5%, 0.2 percentage points lower than the previous three-month period.

The fall was driven mostly by more older people who had considered themselves retired but were now looking for work.

“This tallies with other data which suggest more people in their 50s are thinking of going back to work, at a time when the cost of living is rising rapidly,” ONS statistician Sam Beckett said in a statement.

However, the inactivity rate was 1.3 percentage points higher than before the pandemic.