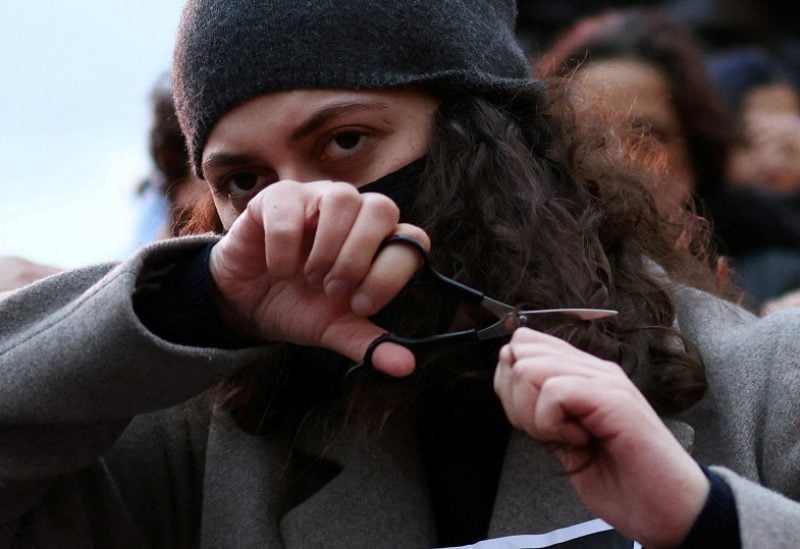 FILE PHOTO: A woman cuts her hair during the #Hair4Freedom, a mass haircutting event, led by Women's charity FiLia and anti-religious law campaign group One Law for All, to show solidarity with Iranian women, in London, Britain, November 26, 2022. REUTERS/Henry Nicholls/File Photo

“The world cannot turn a blind eye to the abhorrent violence committed by the Iranian regime against its own people,” Foreign Secretary James Cleverly wrote on Twitter, saying that Britain was “outraged” by the news of execution of a protester in Iran.

“The UK is opposed to the death penalty in all circumstances.”

Cleverly’s reaction came following reports of an execution of a prisoner convicted for a crime allegedly committed during the ongoing nationwide protests, the first such death penalty carried out by the country.

The execution was ordered for Muhsin Shikari, who, according to the Mizan News Agency, affiliated with Iran’s judiciary, “threatened citizens with a cold weapon and injured a security guard during protests on Sattar Khan Street.”

Shikari was given the death penalty on Nov. 20 and the execution was carried out on Thursday morning.

Iran has seen widespread protests in recent months following the death of a 22-year-old woman, Mahsa Amini, in the custody of Iranian morality police.

Thousands of people have been detained, according to human rights groups, while more than 200 people have died, as acknowledged by the Iranian Interior Ministry last week.