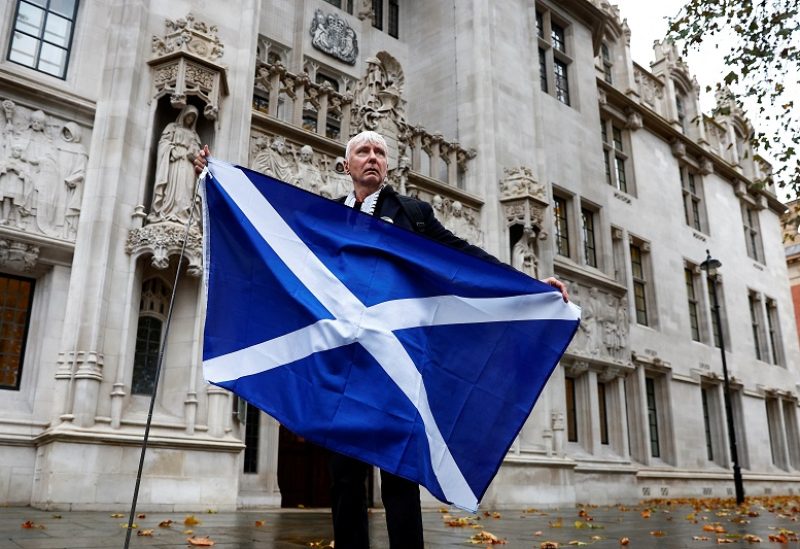 A pro-Scottish independence campaigner poses with a Scottish flag outside the United Kingdom Supreme Court in a case to decide whether the Scottish government can hold a second referendum on independence next year without approval from the British parliament, in London, Britain November 23, 2022. REUTERS/Peter Nicholls

The Scottish parliament does not have the power to organise the referendum independently, said The ruling from the top judges in the UK.
The power to call a referendum was “reserved” to the UK parliament, and therefore “the Scottish parliament does not have the power to legislate for a referendum on Scottish independence”, Supreme Court president Robert Reed said while delivering the unanimous ruling according to Sky News.
Scottish First Minister Nicola Sturgeon had earlier proposed a second referendum – known as IndyRef2 – for next October and that was supported by the ruling Scottish National Party (SNP). She also said that the next general election can also serve as an indication of what the country feels about the referendum.
“A law that doesn’t allow Scotland to choose our own future without (UK parliament) consent exposes as myth any notion of the UK as a voluntary partnership,” the Scottish National Party leader tweeted after the judgement.
Sturgeon had earlier requested a special order under Section 30 of the 1998 Scottish Act to hold the referendum, but it was rejected by four prime ministers.
As a result, the issue was taken to the Supreme Court and the judges ruled that the effects of legislation “are not restricted to legal consequences but can include its practical consequences” and as a result, the special exemption cannot be granted under these circumstances.