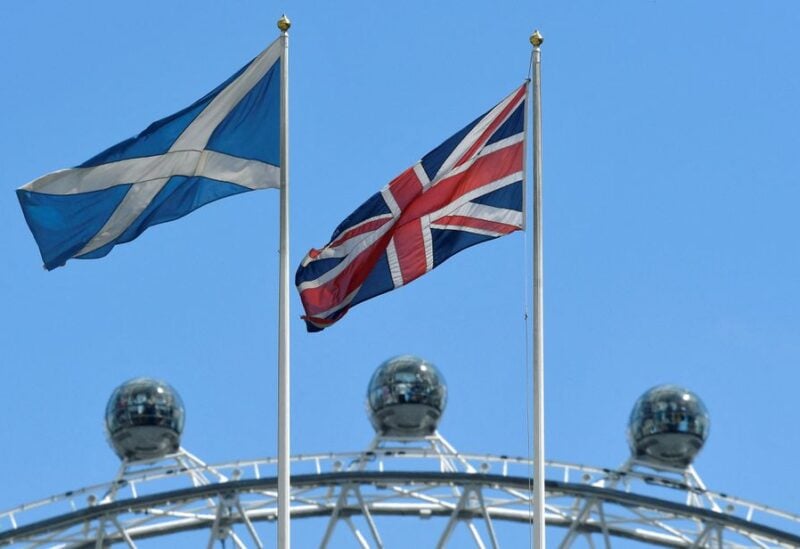 The Scottish Saltire flag flies next to the British Union Jack flag with the London Eye wheel seen behind in London, Britain July 29, 2019. REUTERS/Toby Melville/File Photo

The battle to host a second Scottish independence referendum continues to the Supreme Court of the United Kingdom next week, when it hears arguments for enabling a secession vote in a year’s time without the agreement of British Prime Minister Liz Truss and her cabinet.

The UK Supreme Court has been requested to rule on whether the semi-autonomous Scottish government, led by the Scottish National Party (SNP) and supported by the Scottish Greens, who also favor independence, may proceed with plans to hold a referendum without the permission of the British parliament.

At stake is the very future of the United Kingdom. Polls suggest the outcome of any vote on whether to break Scotland’s three-century-old union with England would be too close to call.

“The lawfulness or otherwise of the referendum must be established as a matter of fact, not just opinion,” Scotland’s First Minister Nicola Sturgeon said when she announced plans in June for the vote. “We must establish legal fact.”

In a 2014 plebiscite, which the British government approved, Scots rejected independence by 55%-45%.

But, the SNP argues the vote for Britain to leave the European Union two years later was a game changer, as a clear majority in Scotland were opposed to Brexit. One of the main arguments put forward by opponents of a breakaway in 2014 was that an independent Scotland could not join the EU.

Nonetheless, the government in Westminster has held firm that there should be no second vote.

“I was partly brought up in Scotland as well as in England. We’re a family and we need to stay together.”

Sturgeon argues that as voters backed pro-independence parties in elections for the Scottish parliament last year, there was a mandate for them to bring forward a bill to hold a referendum on Oct. 19, 2023.

But, she has recognised any move to independence has to be legal and internationally recognised. She said next year’s vote would be consultative, not self-executing, and would require further legislation from both the UK and Scottish parliaments for Scotland to become independent.

Scottish nationalists will be mindful of the fate of Catalan separatists who unilaterally declared independence from Spain in 2017. Spanish courts declared the move illegal, and the bid for secession failed.

Scotland, which has a population of about 5.5 million, has been a part of Great Britain since 1707. Under the 1998 Scotland Act, which created the Scottish parliament and devolved some powers from Westminster, all matters relating to the union are reserved to the UK parliament.

What the Supreme Court will be examining in its two days of hearings starting on Tuesday is a reference from Lord Advocate Dorothy Bain, the most senior law officer in Scotland, as to whether the Scottish government’s proposed referendum bill falls into this category.

“Despite the highly charged political context, it is a question of law,” Bain said in her written submissions. “It is therefore a question that can only be authoritatively determined by this court.”

The SNP argues that not allowing the referendum would damage public trust in elected government, and says the right to self-determination was “fundamental and inalienable”.

It argues that given Scottish lawmakers only make up 59 of the overall 650 in the Westminster parliament and all the main UK-wide parties oppose independence, there would no practical means to push for a referendum through the UK legislature.

“If there is no way in which to exercise a right, it is no right at all,” it said in its submissions.

However, the Advocate General, Scotland’s top law adviser to the British government, argues the suggestion the referendum would be merely advisory was not credible, and that it was clearly a reserved matter for the UK-wide parliament as per the 1998 Act.

He argues the case should not even be considered at all as the bill was yet to be introduced to the Scottish parliament.

Legal commentators agree it will be very difficult to convince the court to give approval to the referendum bill.

“They are trapped within a statute which is very carefully drafted,” David Hope, an ex-deputy president of the Supreme Court and formerly Scotland’s most senior judge, told Reuters last year.

“There is an argument, I suppose, about the democratic will of the people, but I don’t think that arrives in the provision of the Scotland Act.”

Far from ending the independence debate, Sturgeon has promised that defeat in the Supreme Court would mean the SNP would fight the next UK-wide election, due to be held in 2024, solely on a platform of whether Scotland should be independent, making it a ‘de facto’ referendum.