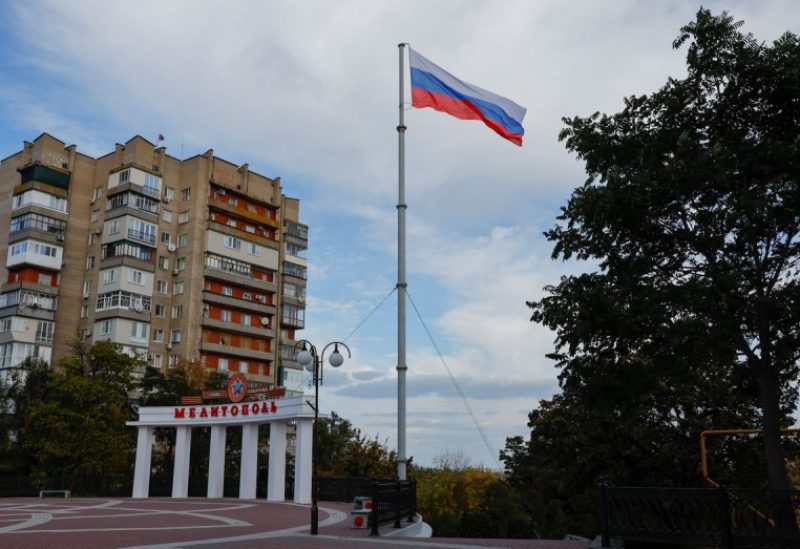 A flag flies in a square in the course of the Ukraine-Russia conflict in the city of Melitopol in the Zaporizhzhia region, Russian-controlled Ukraine October 13, 2022. REUTERS/Alexander Ermochenko/File Photo

The Russian-installed and exiled Ukrainian leadership of the strategically positioned city claimed that Ukraine assaulted occupied Melitopol on Saturday night.

The exiled mayor claimed that scores of “invaders” were killed, while the pro-Moscow authorities said that a missile attack left two persons dead and 10 injured.

Reuters could not independently verify the reports of the attacks or deaths.

He said a “recreation centre” where people were dining was destroyed in the Ukrainian attack with HIMARS missiles.

The exiled mayor, Ivan Fedorov, said on his Telegram channel that the attack hit a church that Russians had turned into a gathering place.

Vladimir Rogov, another Moscow-installed official in the Russian-controlled part of Zaporizhzhia, said a big fire caused by the strike engulfed the recreation centre. He posted a video of a structure in flames.

HIMARS multiple rocket launchers have been among Ukraine’s most effective weapons in the war, delivering precision fire on hundreds of targets, including Russian command posts. On Friday, the United States said it was sending more aid to Kyiv to strengthen its air defences and defeat drones.

An adviser to Ukrainian President Volodymyr Zelenskiy, Oleksiy Arestovych, said Melitopol, a major industrial and transport centre occupied by Russia since March, is key to the defence of the south.

“All logistics linking the Russian forces on the eastern part of the Kherson region and all the way to the Russian border near Mariupol is carried out through it,” Arestovych said in a video interview on social media.

“If Melitopol falls, the entire defence line all the way to Kherson collapses. Ukrainian forces gain a direct route to Crimea.”

There was no immediate comment from the Ukrainian army about the attacks. Earlier in the day, the central command of the Ukraine’s Armed Forces said it had been conducting strikes on Melitopol.