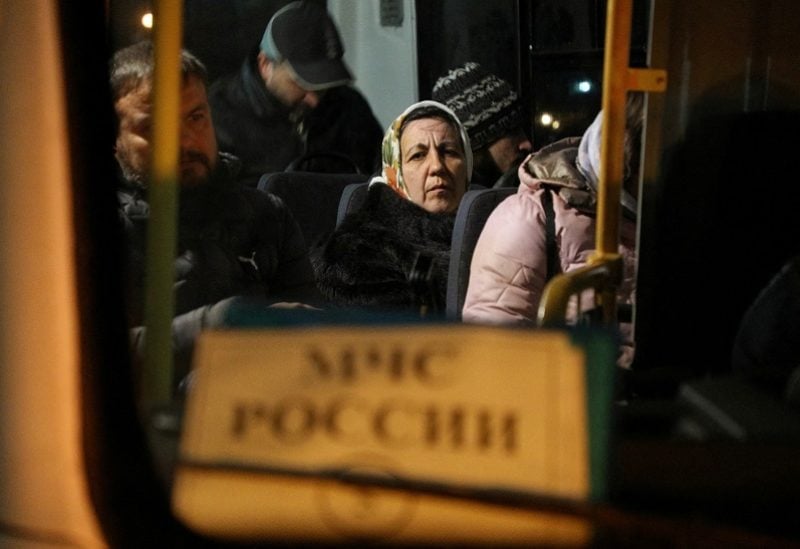 Civilians evacuated from the Russian-controlled part of Kherson region of Ukraine sit inside a bus as they arrive at a local railway station in the town of Dzhankoi, Crimea November 10, 2022. REUTERS/Alexey Pavlishak TPX IMAGES OF THE DAY

Marking a significant retreat for Russia, Russian Defense Minister Sergei Shoigu ordered his troops to withdraw from the southern city of Kherson, which is situated to the north of the Dnipro River on the left bank.
Defense Minister Shoigu and General Sergey Surovikin said that troops should regroup on the other side of the river, as Ukrainian forces advance.

“Having comprehensively assessed the current situation, it is proposed to take up defense along the left (eastern) bank of the Dnieper River,” said Surovikin in a televised briefing.

Surovikin said that it was no longer possible to deliver supplies to the city of Kherson and other areas on the left bank of the river; Shoigu agreed with his proposal to retreat and set up defenses on the other side.

“Proceed with the withdrawal of troops and take all measures to ensure the safe transfer of personnel, weapons and equipment across the Dnieper River,” Shoigu told Surovikin.

Shoigu was on a visit to the region for briefings with military commanders.
The news coincided with images circulating online showing the Darivka bridge on the highway heading east out of the regional capital almost completely destroyed and lying in the River Dnieper. It was not immediately clear how the bridge had been destroyed or by whom.

Images had also circulated earlier in the week of the regional government building in Kherson apparently without a security presence and without Russian flags visible. However, Kyiv had warned at the time that some of these images might be disinformation or a trap or both.

Surovikin told Shoigu that some 115,000 people had been removed from the western bank of the Dnieper.

Ukraine defines the movement of these people towards Russian occupied territory as deportation.

Kherson is one of the regions Russia recently declared annexed following so-called referendums.
The regional capital of the same name was also the first major city Russia seized following its February 24 invasion. Kherson borders Crimea, which Russia illegally annexed in 2014.

We will save the lives of our servicemen: Russian General Sergei Surovikin
Russian President Vladimir Putin will not attend the Group of 20 summit to take place in Bali, Indonesian officials said.

Russian Foreign Minister Sergey Lavrov will lead the Russian delegation at the annual meeting of the leaders, officials added. The meeting is slated to take place from November 15-16.

Biden, however, had ruled out meeting Putin if he did attend G20.

All eyes are on whether Biden and Chinese President Xi Jinping, also attending the summit, will meet on the sidelines in Bali. The White House has not confirmed the meeting between the leaders yet.

“It’s evidence of the fact that they have some real problems, Russia, the Russian military,” Biden said in Washington.

“In the area of foreign policy I hope we’ll continue this bipartisan approach of confronting Russia’s aggression in Ukraine,” Biden added.

A group of Ukrainian lawmakers is also set to visit Washington in December, the New York Times reported.

Svyrydenko told members of the media that government was embarking on a number of cost-cutting measures, such as trying to cut down on the amount of government staff while also looking to privatize smaller state-owned enterprises.

Svyrydenko said Ukraine was also looking to extend the suspension of US steel tariffs to give Ukrainian steel producers — who have suffered due to Russian missile attacks — some breathing room.

It has prepared delivery of more anti-aircraft missiles, dozens of mine-clearing tanks and minesweepers, and five mobile reconnaissance systems.

A timeframe for delivery was not given in the interests of security.

Stoltenberg was speaking in London where he met with British Prime Minister Rishi Sunak, and said the victory was down to the actions of Ukraine’s armed forces but also highlighted the support being provided by allies.

“The victories, the gains the Ukrainian armed forces are making belongs to the brave, courageous Ukrainian soldiers but of course the support they receive from the United Kingdom, from NATO allies and partners is also essential,” Stoltenberg said.