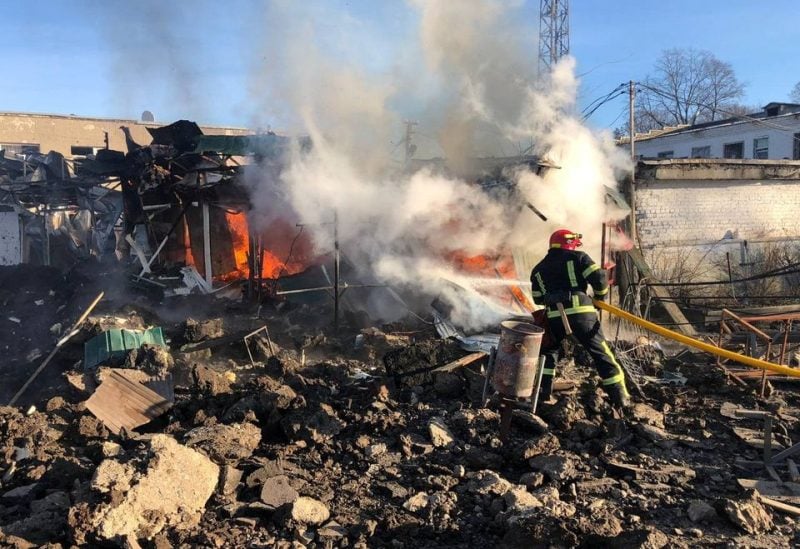 A firefighter works at a site of a market hit by Russian missiles, amid Russia's attack on Ukraine, in the town of Shevchenkove, Kharkiv region, Ukraine January 9, 2023 - REUTERS

In the eastern Donbas, Ukraine claimed it was bolstering its defenses near Bakhmut to fend off frequent assaults from the Russian mercenary organization Wagner, whose leader has pledged to seize the enormous underground mines there.

According to Ukrainian officials, Kyiv had dispatched reinforcements to Soledar, a tiny hamlet close to Bakhmut where the situation was particularly dire.

According to a statement from the Ukrainian military, “the enemy once more launched a frantic attempt to invade the city of Soledar from several directions and threw the most professional troops of the Wagnerites into battle.”

The Wagner mercenary group’s creator, Yevgeny Prigozhin, has been attempting to capture Bakhmut and Soledar for months at great human cost. On Saturday, he claimed that the network of mines there was what gave it its value.

“It can deploy tanks and infantry fighting vehicles as well as hold a large group of troops at a depth of 80 to 100 meters.”

The strategic military benefit to Moscow, according to observers, would be modest. Prigozhin, a significant ally of Russian President Vladimir Putin, is reportedly eyeing the salt and gypsum from the mines, according to a U.S. official.

President Volodymyr Zelenskiy said in nightly video remarks on Sunday that Bakhmut and Soledar were holding on despite widespread destruction after months of attacks.

“Our soldiers are repelling constant Russian attempts to advance,” he said. In Soledar “things are very difficult”.

In an evacuee center in nearby Kramatorsk, Olha, 60, said she had fled Soledar after moving from apartment to apartment as each was destroyed in tank battles.

“All of last week we couldn’t come outside. Everyone was running around, soldiers with automatic weapons, screaming,” said Olha, who gave only her first name.

“There isn’t one house left intact,” she said. “Apartments were burning, breaking in half.”

Pro-Russian bloggers quoted Prigozhin as saying his forces were fighting for the administration building in Soledar.

The Ukrainian military said reinforcements had been sent to Soledar and everything was being done to fend off the enemy.

“There are brutal and bloody battles there – 106 shellings in one day,” Serhiy Cherevatyi, a spokesman for the military in the east, said on Ukrainian television.

Andriy Yermak, head of the Ukrainian presidential staff, said Moscow was suffering huge losses to try to justify its mobilization of reservists, but was not succeeding. “Our soldiers’ feat is titanic,” he wrote on Telegram.

Reuters was not able to independently verify the battlefield reports.